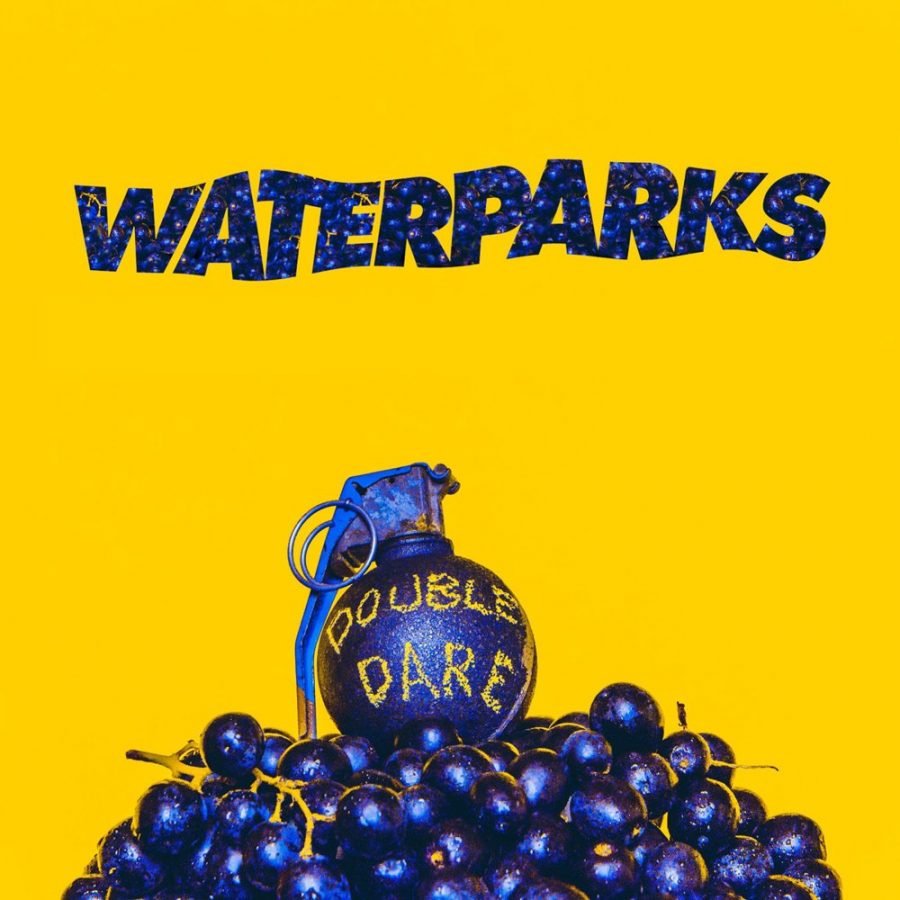 Flamboyantly swinging his guitar from side-to-side, the charismatic and energetic Awsten Knight emerges from backstage. His self-proclaimed “natural blue” fringe is already matted to his forehead with humidity and sweat, but that’s to be expected. It’s the summer of 2016, it’s his band’s first show at Van’s Warped Tour, it’s 100 degrees, and he’s overcome with nervous energy.

The rest of the members of Waterparks take their places. Guitarist Geoff Wigington rolls his eyes at Knight’s ever-eccentric clothing choice- a Britney Spears tour shirt and star-shaped shades that match his hair. Then he positions himself at the edge of the stage, flashing winks and smiles at the few people gathered in the pit. Otto Wood takes his place at the drums, his signature mess of dark curls wrestled into a beanie despite the heat.

As a new band in the alternative scene, the small stage they just barely managed to book doesn’t attract much of a crowd. The tattooed punks turn up their noses, sneering at the young boys and opting to watch more hardcore bands on the opposite side of the festival. Even the pastel-clad teenage girls that buzz around the stage label them as “posers,” “5SOS rejects,” and the kiss of death for any rock group: “boyband.”

Knight plays a number of mediocre electronica-tinged singles from their EP “Black Light”, covers a couple Blink-182 songs, and manages to keep the crowd satisfied. As the set comes to an end, he smirks to himself, knowing that he has something in store that will bring his image from “poser” to pop-punk legend.

A few months later, Waterparks’ debut album “Double Dare” was released on November 4, 2016, and it signified a turning point for the Texas rockers. It was produced under “Easy Life Records,” a fairly unknown company that commonly hides in the shadows of bigger alternative labels. Because of this, no singles ever aired on mainstream radio. But, due to Knight’s charming social media presence and rabid fanbase, this album was well-promoted and received the appreciation of many critics.

With 13 tracks and a length of 44 minutes, this pop-punk tale of star-crossed misfits in love is laced with nostalgia and a need to return to a simpler time. At the same time, it spouts criticism of the music industry, its consumers, and even America itself.

A notable song is the track “Plum Island,” which sees Knight evaluating the hypocrisy of the general public, and the pressure he feels to keep creating different and “edgy” content. He does so to an addictive beat that makes you want to whip out some drum sticks and play along. As each verse fades in and out, an electronic interlude reminiscent of Panic! At The Disco’s “A Fever You Can’t Sweat Out” keeps the listener captivated.

The first single, “Stupid For You,” has swept over the alternative scene like a virus. Candy-coated and sickly sweet, everything about it drips with radio-ready pop appeal. At a first listen, it sounds straight off a One Direction record. The instrumentation is so saccharine, and the recycled boyband lyrics so immature that it’s near impossible to stomach. However, upon further inspection, it’s clear that this was the band’s intent. The track is a parody of current pop music, especially boyband culture. This is made clearer by the music video, which features the band playing behind a curtain as their boyband alter-egos lip-sync and dance to the music.

The track “Made In America” is driven by intense guitar not found anywhere else in Waterparks’ discography, and supported by Knight’s uncharacteristic, robust vocals. At this point in the album, the sweeter, easy melodies of their earlier EPs have been abandoned completely. By the final rendition of the chorus, his tone nears a fitful scream as he belts out “We’re made in America/We’re classic hysteria/We’re culture clashing, hazard smashing.” These strikingly accurate lyrics critique our tendency to fall into cycles of fear of the unknown. Insight of this level is rivaled only by Green Day’s “American Idiot.”

In “Powerless,” Knight’s mood shifts from rebellious angst to heartfelt longing. His vocal performance is stripped of all its former confidence, as he delivers crushing lyrics like “Tell me why/You never really missed me back/I want you to need me like I need you/I need you to see me when I’m see-through.” For most of the song, the guitar takes a back seat to truly let Knight’s voice shine. The music is hazy, swimming gently into one ear and out the next. However, the chorus still swells to a crescendo with thundering drums and electric riffs.

Waterparks’ debut album showcases the pure talent that sets them apart from others in the music industry, along with their ability to write introspective and relatable lyrics. It completely abandons their former immature sound, in favor of something entirely unique.  Full of emotion, passion, and sickeningly catchy hooks, “Double Dare” is a breakthrough album for punks and preps alike.