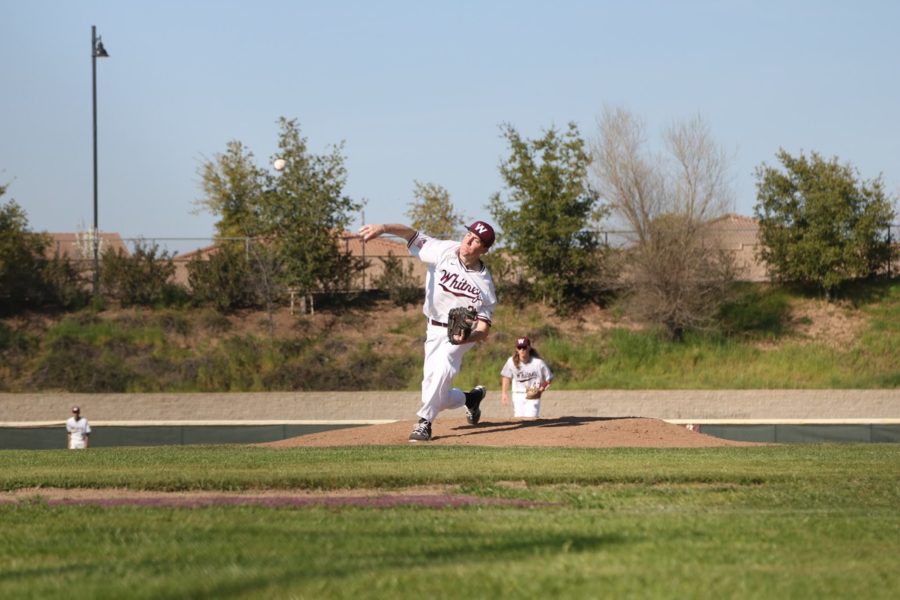 At the men’s varsity baseball game against Bella Vista March 14, John Crouse throws his last pitch during warm-ups for a throwdown. Photo by Morgan Hawkins.

The men’s varsity baseball team brings in  Lyell Marks to be the head coach for the 2017 season. Marks has played for three colleges as well as coached at Colfax.

“My initial reaction when I heard about Dorchak stepping down was, what the heck, and why? The whole team couldn’t believe that he was stepping down after playing with him for so many years. The whole team was shocked, sad and nervous about what would happen to the team,” varsity player Mike Galli said.

Coach Dorchak stepped down to spend more time with his daughter and family.  The new head coach Mr. Lyell Marks, who previously coached at Colfax, takes over the program.

Varsity baseball player Lane Field is interested in what a new coach will bring to the program and how he will help their personal growth.

“I was looking forward to starting over with a new coach too. It was something that I am going to experience next year at the college level, having to prove myself and prove that I deserve to play. So there is an opportunity that I needed to take advantage of. Everyone gets to fight for an open spot. We still know that Dorchak will visit us to watch us perform and to see our growth,” Lane Field said.

Coach Marks runs a different type of practice that the team had to get accustomed too, according to Lane Field.

“Last year’s practices were very fundamental; we would take grounders and fly balls every day, while this year we do a lot more live scrimmages, which help us with live game situations that we may not experience as an individual,” Field said.

“We do a lot more intrasquad scrimmages, which is a different mentality than what most coaches have,” Souto said.

At games, Marks uses a different coaching style as well.

“Dorchak was high intensity all the time; Marks helps us relax by giving more encouragement when we are playing and to not worry if you make an error, helping relieve the pressure of the game. Helping me grow as a player because he coaches differently and knows a lot about the game,” Galli said.

“At games Coach is more about winning; he lets the catchers call the pitches, while he calls the offensive plays,” Souto said.

So far the team has had one series against Bella Vista and went 1-3 putting the Wildcats sixth in the CVC league.

“Our team goals is to win league, and learn from our mistakes so we don’t lose another series. We don’t know what the other teams have in store for us, because many teams graduated good seniors, but we are ready for whatever the season throws at us,” Souto said.

The varsity baseball team’s  next home game is March 24 at 4 p.m. against Del Campo. The game is an X-Factor game and the theme is American.

by MADILYN SINDELAR and LIZZIE SALVATO