Theater prepares for this weekend’s showing of ‘Almost, Maine’ 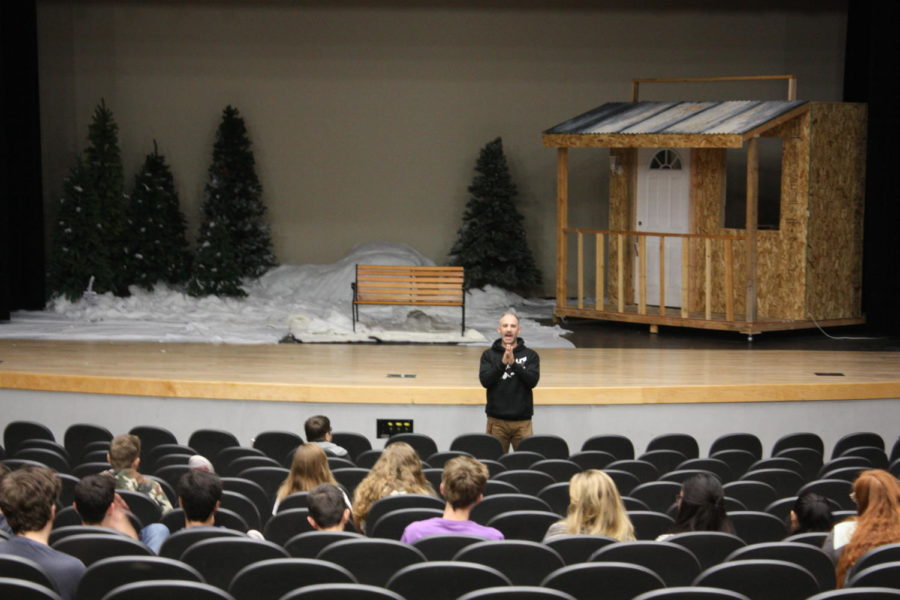 Theater teacher Mr. Joshua Ansley directs his first period Theater I class in an activity that may assist them in auditioning for a play like the cast of “Almost, Maine.” Photo by Shannon Bone

With the first step into the theater classroom, it’s an almost immediate transition into the bustling preparations for this weekend’s production of “Almost, Maine.” The theater classes along with the Drama Club have been preparing since school started, and theater teacher Mr. Joshua Ansley gives insight on what to expect and how they’ve been preparing.

Q: How have you and the class been preparing? How is class different than rehearsal?

A: Only the technical theatre and BITA classes really contribute to the show itself, preparing the set, set pieces, props, costumes and stage management. The Theater I-IV classes are set apart really as classes and do not contribute to the production. That’s really one of the greatest challenges for myself: balancing teaching and preparation for the productions simultaneously.

Q: How is this production different than others?

A: “Almost, Maine” is a modern show compared to the Victorian Era featured in last year’s show, “The Importance of Being Earnest.” It’s allowed for a lot more freedom both for the actors and for technical aspects like costuming. The language is more relatable and accessible to a young adult audience.

Q: How is working with the new cast and crew?

A: It’s really different from last year since there’s a larger variety of skill level. We have some people who’ve worked some professional theater productions, for example our costume manager and our sound manager, who are both very knowledgable of their subjects. But then there’s some who’ve never done theater before, who are working backstage for the first time. That makes it very exciting because I actually get to teach, and there’s a lot of energy and passion and they can do what I envision.

Q: What are your expectations for this production?

A: I really hope it’s a lot of fun for people to watch. last year’s production was a little boring really, but I hope that this one is more fun. It has a variety of scenes and moods, from comedy to the romantic side of it. I just hope that people have fun watching it and really can get into it.

Q: What are some reactions that you’re looking forward to or expecting?

A: There’s a humourous side to the play. It’s not “laugh out loud” but it’s weird and magical, and I hope people can understand the magic of it and smile. It’s kind of a magical realism world, and it’s set in a place where not a lot of people are familiar with it. So I hope people can really see and feel that and the truth of what these people deal with in these relationships.

Q: How do you want this production to be remembered among the school?

A: I hope people see it and want to get more involved in theater, maybe join the club or get into the class.