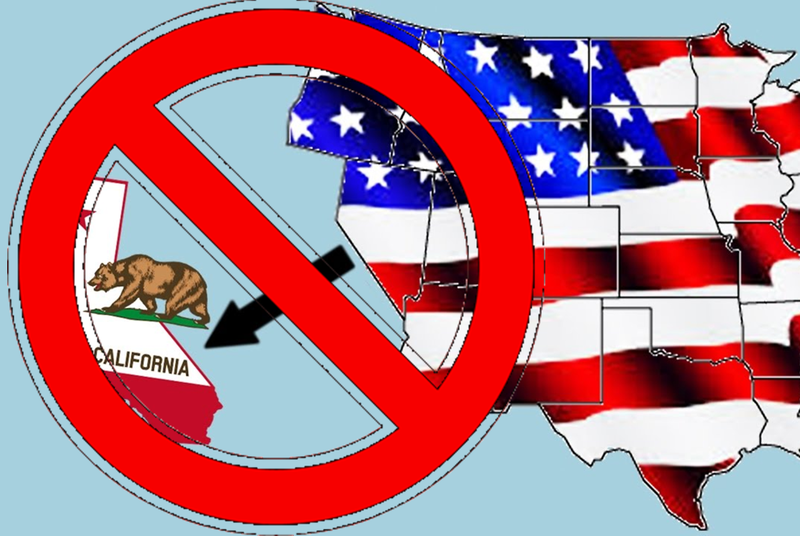 Illustration by BlueHypercane761 on Wikipedia Commons. Used with permission under Creative Commons.

California is an undeniably unique state: from Hollywood to Silicon Valley, from the sun-soaked beaches of Los Angeles to the snow-capped mountains of Lake Tahoe. The politics differ radically from most of the surrounding states as well. California voted overwhelmingly for Hillary Clinton in 2016, and college campuses and large cities have become notorious for being radically left-wing, which can be seen in demonstrations such as the Berkeley College riots. All of these factors have led some people to ask the question: Is California it too unique to fit in with the rest of America?

The founder of Yes California, Louis Marinelli, would say that it is. He took to the streets of Sacramento for a rally advocating for something that could change American history forever, Feb. 14. He represented 366,000 Americans who demand the secession of California from the United States.

The California Self-Determination Referendum Act is an independence referendum which will appear on ballots May 4, 2021. If passed, it could possibly give California the green light to become its own independent nation.

Marinelli and his co-founder Marcus Ruiz Evans have cited several reasons why California can no longer remain a part of the union.

One reason is that California state laws differ radically from federal laws. A recent bill made it a felony to possess certain combinations of magazines and rifles, which limits the right to bear arms in California. Keep in mind that child molestation, vehicle theft and knowingly exposing others to HIV are not felonies; they’re only misdemeanors.

Want #GunControlNow? The #SecondAmendment is the single greatest barrier. Electing more Democrats is not going to help. Nobody is going to repeal or amend the #2ndAmendment. #Calexit is the only way to have a country w/o the #2A and w/o the @NRA, so gun control can be a thing.

Another example of California’s so-called irreconcilable differences is the popular view on border security and immigration. California recently became a sanctuary state, meaning that any illegal immigrant who is detained by police cannot be turned over to I.C.E. for deportation. Some see this as negative because it keeps criminals who are not citizens in the United States. However, Yes California proposes that if California were able to become its own nation, it would continue to be lenient on undocumented immigrants without the disdain from the rest of the U.S.

Yes California also has issues with the U.S. voting process. They don’t believe in an electoral college, and their constitution calls for a direct democracy. In other words, the nation of California would be ruled by whoever the majority votes into office. They do not believe a republic is the best way to preserve liberty, although this method of election has been used for centuries.

While Yes California claims to stem from “liberal” ideologies, not every liberal or Democrat supports the referendum. Despite identifying as a Democrat, Gabby Bocchicchio, vice president of the Progressives of Whitney club, thinks that secession is the last thing California should do.

“I don’t support leaving the union because what makes California the [state] we know is partly how we know it as a part of the U.S. While we probably could sustain ourselves, it would completely change everything about the state, which I don’t personally think is best,” Bocchicchio said.

While Marinelli calls this a revolution, Carly Keeley, who has a mainly progressive ideology, sees secession as more of a white flag than the beginning of a battle.

“It’s just trying to take the easy way out. Instead of trying to fix issues people see in the government and fight for their voices to be heard and make a difference, they’re instead throwing away any opportunity to make good and necessary changes to our government,” Keeley said.

This idea is not without its flaws. California is famed for being the sixth largest economy in the world, and much of that wealth comes from the mainly red counties that are responsible for keeping agriculture thriving. The blue counties house tech giants in Silicon Valley and entertainment and tourism meccas like Los Angeles. As Keri Chen explains, some feel there is no way to evenly divide resources.

Both Yes California and New California are sending the message that something must be done in this state. When people see issues in the political world, their first instinct is often to take things straight to the federal government. However, with all these recent efforts to change things at the state level, it reminds citizens of a very important part of the ingenuity of our republic. If you don’t like something, you don’t always have to take things straight to Washington. You can make a change in your very own backyard.