Tennis team adjusts as more players are cut than ever before 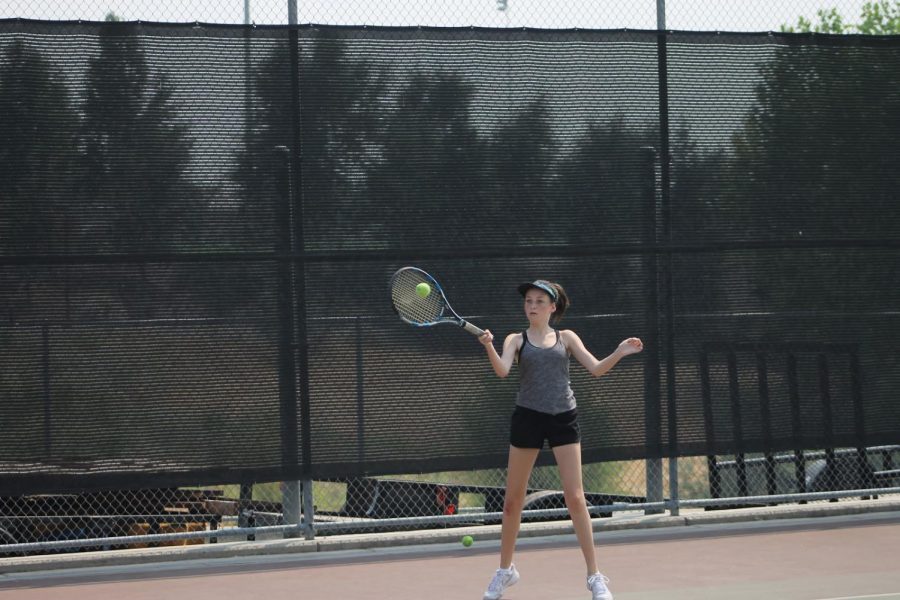 While at practice Aug. 9, Gabby Mehren receives and returns a serve during warm-ups. Photo by Brenden Jacoby

The end of the summer marks the beginning of fall sports tryouts, where students have their first opportunity to join a new sport. Tennis, usually known to be a “no cut” sport, differed this year; out of a total of 45 hopeful players, only 29 were selected. In comparison to past seasons, Coach Mike Holmes decided to cut 16 girls out of the largest group in their program’s history.

“I’ve had to make cuts every year I’ve been here, but typically it’s only been five to six girls, not that many. It’s easier for some girls to make a team with a larger roster than a 10 girl basketball team or softball team. I don’t really know why it was so popular, maybe because of the huge freshman class,” Holmes said.

The freshman class has approximately 500 students. The increase means more students trying out and more getting cut. The tennis team, for example, had athletes try out without any competitive playing experience, so they were the first to be cut.

“Typically we get a handful of girls who have never played before. I cut over 10 girls and those were the ones who couldn’t play. There were a few who had taken some lessons, but haven’t done a lot of competitive play. The girls understand the game, but if you come out and have never played before, you’re going to be a hard press to make the team. We are here to develop a team and get ready to represent our school, I’m not here to coach individually,” Holmes said.

Although they had played in past seasons, some returning players were overwhelmed by the amount of athletes trying out, and felt that their spot on the team could have been at stake.

“Honestly, I was pretty scared because my spot wasn’t guaranteed, so I had to really bring it,” Faith Ansaldo said.

On the other hand, Holmes was happy about the increase in players this year and feels that it will make the future team even stronger than before.

“I feel great about it. I think it’s a real testament to how the school is growing and how the community is embracing tennis. It’s really fantastic. One of the benefits to having so many people try out is that we can work to develop a team. In tennis, only 12 girls play in a match, and just because you have more numbers does not mean the team is going to be better now, it means we have the potential to be better in the future,” Holmes said.

In addition to the large amount of new players, the team will also have the added challenge of joining the Sierra Foothill League. To adjust to this, the team will be splitting into varsity and JV this year.

“We didn’t really have a freshman team or a JV team and we just combined them into one varsity team. This year we are breaking it up into a JV team and a varsity team which is only going to benefit us in the long run as far as development and just getting better earlier. Overall it’s going to help us as we compete in the SFL for these next few years,” Holmes said.

The team’s first official match is Aug. 17 at home.