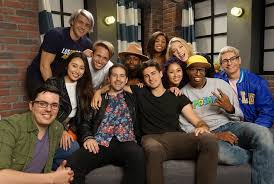 Cast members of the Smosh family pose for a picture. Smosh used to be a YouTube channel, that uploaded sketch comedy videos. Photo by Wikipedia, used with permission

The Smosh YouTube channel will no longer be creating content due to its parent company, Defy Media, shutting down its Beverly Hills office.After coming home from a stressful day of school, many students spend a chunk of their day on a phone or computer watching YouTube. These channels are often students’ main source of entertainment, since many of them no longer watch cable TV. This is because it’s so much easier to watch content directly from their personal device. However, many students will no longer be able to watch one of YouTube’s longest lasting and most successful channel and brand, Smosh.

Defy Media was a company that owned many brands, ranging from a variety of comedy, gaming and style channels. These channels all brought in large amounts of viewership to bring revenue in for the company. According to Defy Media’s website, all of their brands combined boasted 756 million views per month, 79 million total subscribers, and 1.4 billion minutes viewed per month. However, the most popular among these brands, Smosh, accounted for over 25 percent of Defy Media’s monthly viewership.

Smosh was originally found in 2005 by two friends, Ian Hecox and Anthony Padilla, when they were in college. They focused mainly on sketch comedy and music videos, but their content extended to anything they found interesting and wanted to create. Their most popular video, Beef’n Go, has earned over 103 million views to this date. On 2012, Smosh founders Hecox and Padilla joined forces with Matthew Sohinki, David Moss, Joshua Ovenshire, and Mari Takahashi to form Smosh Games, which currently has over 7 million subscribers.

However, in 2017, Padilla left the Smosh brand abruptly, creating a large feeling of confusion among their fanbase. Padilla promised there was no issue with his fellow cast mates, but just felt he was lacking creative freedom and creator’s choice. However, Padilla uploaded a video to his personal channel Nov. 7 going into further detail about why he left the brand, as the majority of the reasons were rooted in the parent company, Defy Media. In fact, Padilla went so far to say that he had lost all control over the project he once created as a teenager, as he had no power over what was done, and was reduced to being a regular employee.

Despite content creators working for the Smosh channel saying the channel had been receiving record breaking views, Defy Media declared they were shutting down due to market conditions. To make matters worse, the company gave its employees no warning as 80 people lost their jobs without any previous notice.

With so much frustration going around in the online community, numerous tweets came to light saying how the company owed individuals up to $30,000, despite constantly hiring new employees, even up to the date of closing.

The accumulation of all this anger led to many popular social media figures, such as Shane Dawson, criticizing the company for its actions, and going so far to call them a “evil company.”

After all of the chaos that went down regarding the company and the Smosh brand, its cast members have only asked their fans to continue following their individual content and to stay tuned to their progress across the digital world.