Extra ‘finals’ before Finals Week are unfair and stressful for students 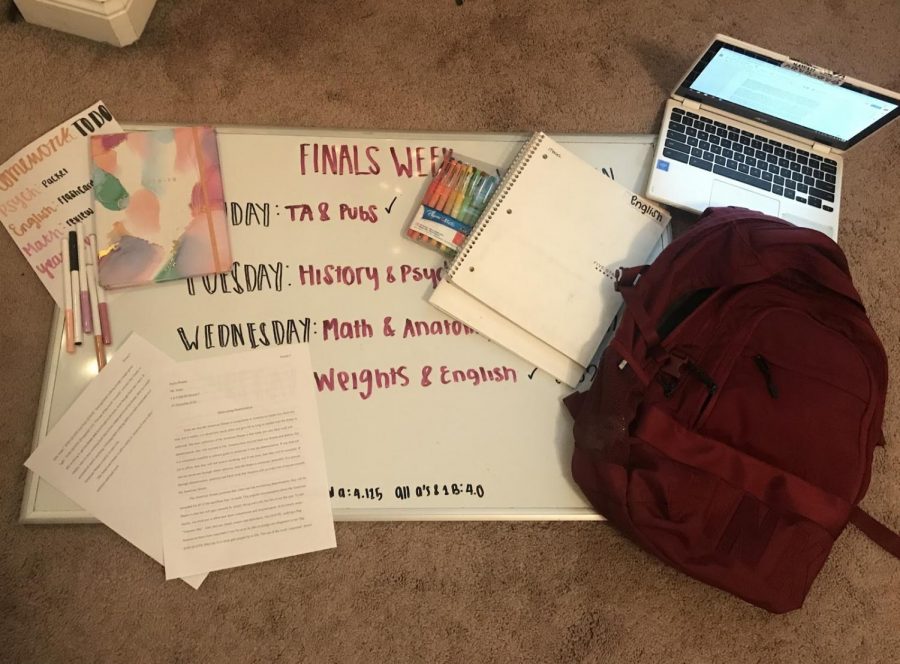 Students cram as much as they can prior to possibly eight finals. Photo illustration by Emily Pontes.

The stress of finals can affect every student on campus, but it is not expected until the last week of every semester. What isn’t, and shouldn’t be, expected are tests that are given a week or two prior to finals. The weeks prior to finals shouldn’t be stressful since there is actually a week dedicated to Finals. Why is it that teachers are constantly trying to cram a chapter of information into the week of school before finals? Also adding the fact that it is technically only two or three days with our school’s block schedule. Since teachers are most likely assigning a cumulative final exam during Finals Week, the new chapter of crammed information should just appear on the final instead of also having a test prior to Finals Week.

The same implies for Thanksgiving break. In my personal opinion, I’ve always felt that the week prior to Thanksgiving break was a mini Finals Week. By teachers not wanting to take a week off of school with a chapter not completely taught, they finish the unit as quick as possible and assign a test right before break. This adds more stress to students because due to such little time to prepare, their grades can drop from these tests. Once students return from break, they only have three to four weeks to perfect their grades in general and now to also make up from the possible poor test scores that they received the week prior to Thanksgiving break.

As a student, every year around finals I hear teachers stressing how hard and overwhelming this time of year is for them, due to students begging for extra credit to students trying to get any late or makeup work turned in. It is completely understandable for teachers to feel overwhelmed, but it is very frustrating for students who are just as or even more stressed and for all they know, they feel it could all be prevented by the teacher.

With having such a short amount of time to cram, most of the students do not even care about the information they are learning. They are just trying to pass by receiving the lowest grade they possibly can on the final to still earn the desired grade in the class at the end of the semester.

Having a few weeks to review would be beneficial because students would most likely score higher on the final due to having lots of time to prepare, which would remove some stress from the teachers.

On the other hand, it is nice that our school holds events such Coco & Cram as a time for students to get help outside of school hours from friends and teachers. There is also a correctives and study period the Monday and Tuesday of Finals Week, allowing students to get any last-minute help. As much as these final weeks cause stress, sleep deprivation and emotional breakdowns, it is preparing us for college, something that some other high schools aren’t preparing their students for.

Although, it is frustrating as a student who has many friends from other schools like Rocklin say that they don’t have “finals.” According to Rocklin students, they don’t even have a finals schedule, They attend a normal week of school, having “blue and silver” days like we have “odd and even” days. The few teachers that do assign finals give them during the regular class periods and it is not normal for students to have a final in every class.

Rocklin student Kristen Toppings has two tests the last week of the semester, leaving the other classes as more of a relaxing celebratory period. This helps students be able to predict their grades quicker, instead of waiting until last period Thursday to know their final grade.

By having finals early, Finals Week is a waste. Administrators set a schedule for the week in order to space out the work and to avoid having multiple test on the same day. This idea is ruined when teachers select their own day to hold the exam. By teachers giving their finals a week early, it’s possible for students to have three or four tests on the same day, which is what administrators were trying to prevent in the first place.

A related problem is that when early test occur, then the planned finals period is a waste. This is frustrating because since it is so close to break, students don’t want to come to school to do nothing. A lot of the time if students know nothing is going on, they won’t come.

For students who are big holiday fanatics, the older they get, the less they can celebrate their favorite time of year by spending it with friends and family. According to the American College Health Association in 2016, more than 34 percent of students said that stress had negatively impacted their academic performance. Students exposed to chronic stress can suffer long-term side effects, such as insulin-dependent diabetes and depression.

Many high school students experience different levels of stress coming from school, home, friends, family and relationships, yet just school itself can already cause so much stress and other mental issues like anxiety, mood and behavioural issues. As a student who has gone through many high-stress situations due to school, it is scary to see the permanent damage this can leave on such young students.