According to an Instagram poll, 68 percent of high school students now use VSCO as an editing app and as a way to post extra photos that did not make it to their Instagram. Photo by Emily Pontes

“I started using VSCO a little here and there my freshman year, and I only really started using it as more of a social media app my sophomore year. It started out as a basic app for people to edit their pictures and soon turned into almost another social media platform for people to connect. I love the app because it allows you to edit your photos whatever way you want with a bunch of options to choose from and you can view other people’s edits as well. It’s a place for lots of people to share the photos they like that they might not share to Instagram,” Amanda Goetz said.

Students feel VSCO is a new platform allowing people to edit photos but also get a break from other social media sites.

“I feel like VSCO is refreshing and away from all the other sometimes negative social media sites. I use it to edit photos and get ideas on cute ways to take pictures. It’s becoming a trend and I personally think It’s better than all the other social media sites by having a simpler aspect. Overall it is a pretty new site I like to go on and relax and look at the happy part of life. Every time I go on it there’s always something to make me smile and make my day like inspiration and cute photos I want to take,” Reese Phillips said.

Although the app has been around for three years, people are now just starting to use VSCO more often by using it to connect to other people and their posts they can republish.

“I started using [VSCO] a few months ago [and it] lets me post the same pictures in different angles, express my feelings and look at posts that I can relate to. I love looking at different quotes I find that I can republish. I really enjoy seeing people create memories that they can post. It’s mainly a popular app for girls to post how they feel and to post as much as they want and feel their best,” Roselyn Gomez said.

Some say that VSCO is overrated and should not be a trend. They feel it can ruin the original photo by adding edits and filters.

“I don’t need it, I like to keep it simple and real,” Jacob Bustamante said.

Others feel it isn’t necessary and have no reason to edit photos or look at people’s edited photos.

“It is literally the most unimportant, annoying app I’ve seen in my life because it is irrelevant,” Kenzie McVay said.

According to the app store, VSCO now has 30 million active users and is rated #10 for photo and video apps. VSCO is free to use, but a membership is available for $1.67 per month to unlock all filters and presets. 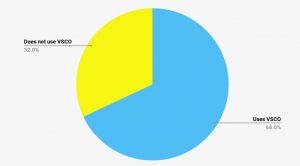 According to a general Instagram poll with 124 responses, 68 percent of Whitney students use VSCO and 32 percent do not use VSCO.