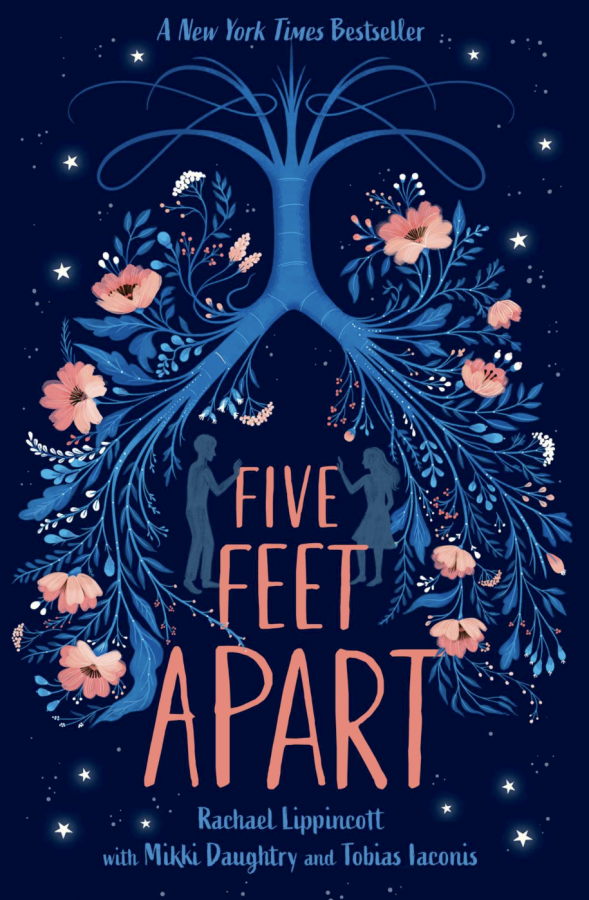 The cover of the novel ‘Five Feet Apart’ by Rachael Lippincott, with Mikki Daughtry and Tobias Iaconis is based of the film that will release March 22. Used with permission under fair use

An emotional and sensitive novel, ‘Five Feet Apart’ will make readers feel appreciation for themselves and be grateful for what they own. The desperation someone feels when their loved ones are forced to stay far away from them is simply terrifying, and this is what makes the story overwhelming with feelings.

Cystic Fibrosis, a genetic chronic disease that produces an overload of mucus in the body affecting the lungs and digestive system, leading to severely shortened life expectancy.

This books does those affected by Cystic Fibrosis justice by being extremely accurate and relatable, thanks to Claire Wineland, a social media role model who inspired thousands of people by sharing what it is like to live with Cystic Fibrosis. She died at 21.

She did hours of breathing treatments a day, and took nearly 50 medications, until her life expectancy became threatening during her mid-twenties.

Her mother, Melissa Nordquist Yeager, gave insight on Wineland’s participation in helping movies: “For the last year or so, Claire was a consultant on the new CBS on Lionsgate film directed by Justin Baldoni about two young people with Cystic Fibrosis.” Yeager said.

Since Justin Baldoni’s ideas were based on romance, they didn’t want to tell her personal story but asked if she and a few other patients with Cystic Fibrosis would be willing to consult with them to make a fair depiction of living with this disease.

To make sure every little was shown, Wineland spent time with the crew working on the script, with the intentions of bringing awareness to Cystic Fibrosis and may lead to a cure.

With Wineland’s story being reimagined inside a film and a novel, she becomes the inspiration for the protagonist, Stella Grant.

Stella and the other main character, Will Newman, both suffer from Cystic Fibrosis. The two are forced to stay at least six feet apart from each other at all times, resulting in the inability to touch one another without the thought of killing the other person. Despite all of this, they still fall in love.

Being tied up with machines and medicines, Stella constantly faces misery in the hospital. With her own philosophy on what life is, Stella tries to take as much control on her life as possible by following her regimen as rigorously as she can. However, Will is the polar opposite of Stella. Will is continuously pessimistic about his life situation and believes there’s no point of life if it’s stuck in a hospital. He traveled all over the world to find a cure for his antibiotic resistant bacteria and yet he feels like he’s always in the same walls.

Her best friend Poe also has Cystic Fibrosis, so the six feet apart rule also holds for him. It’s the moment when Poe and Stella tried to comfort one another that is the most heartbreaking and the reader realizes how important human touch can be and how painful it can be not to be able to experience that with some people.

However, one of my favorites moments was when Stella talks about all the things her disease has stolen from her, and when she proposes to go on a date with Will she says that they’re going to stay five feet apart stealing one feet from they’re disease, since they are supposed to stay six feet apart at all times. Her life gets turned around because of Will. Since they both lack touch, people and life itself, she is willing to sacrifice her life, getting closer to one another, as they get closer to death.

Through all the attempts of fighting against the disease and showing the struggle to breathe on a day to day basis for the characters, this is a book I will always remember. With contributions from Wineland, Rachel Lippincott with Mikki Daughtry and Tobias Iaconis craft novel based on a movie that will release March 22.