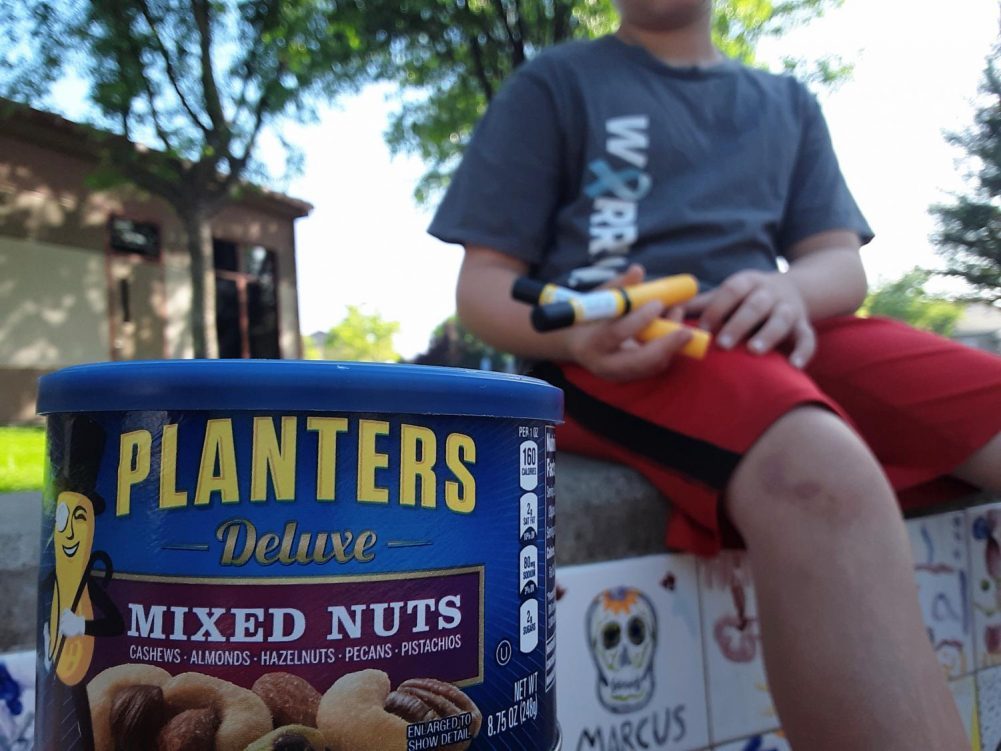 Holding his epinephrine injections, Jacob Roberts sits in the schoolyard surrounded by his deadly allergens. Photo by Alaina Roberts.

Holding his epinephrine injections, Jacob Roberts sits in the schoolyard surrounded by his deadly allergens. Photo by Alaina Roberts.

Eleven-year-old Jacob Roberts fears for his life every day.

“I looked around for all the things that people had that I wouldn’t be able to have. It was nearly everywhere you looked. Brand labels, restaurant menus, other people’s lunches. I was cautious, and I stayed cautious about something that involves life or death,” Roberts said.

For most eleven-year-olds, their biggest concern is who will come to their birthday party or what they will dress as for Halloween.

As a baby, Roberts was diagnosed with severe food allergies to peanuts, tree nuts, sesame, milk, egg and strawberries. Now in the sixth grade, he has outgrown all but his peanut, tree nut and sesame allergies, all of which have gotten more severe. If a trace, a speck of dust, from any of these allergens even touch his face, Roberts will go into anaphylactic shock, causing his throat to close. Epi-Pens are emergency injections that, in the case of a reaction, could save his life, but there have been countless cases of them not being strong enough.

Since most kids shared food and snacks under the table, and he very much could not, Roberts stood out. Other kids noticed and started to tease him. A student began pretending to throw nuts at him. After being peer pressured into it, Roberts even put an almond into his mouth before spitting it out – the only tree nut he is not allergic to.

After three months of this, Roberts reported the primary bully and the rest of the kids in his grade began to distance themselves from the boy who, just months before, they all voted on as class official for Student Council. Roberts lost friends and did not feel safe. At the end of fourth grade, he changed schools.

Food allergy bullying is not a rare occurrence in people who live with these conditions.

One in 13 American children have food allergies, or about two per classroom, according to Food Allergy Research and Education. Out of these kids, over one third have reported being bullied for their food allergies alone, often experiencing threats with food from their classmates just as Roberts did. FARE reports that over half the bullied students detailed not telling their parents. Even though these victims have no control over their potentially life-threatening conditions, a level of shame is often associated with harassment over allergies.

Doctors have been researching and pondering the question for years. Why do people get food allergies? Different theories have emerged, but only two things are confirmed. They’re getting more common and people have no control over their development, according to FARE.

Being bullied over any physical condition is cruel. But threatening students with a fatal toxin to them is another level of dangerous.

In 2017, a college student went into anaphylactic shock after having peanut butter smeared on his face in his sleep. Last year, a severely-dairy-allergic boy died in the U.K. when his classmates seemingly shoved cheese down his shirt.

The regular harassment and endangerment of Rocklin students proves that even such a precious community is not exempt from the reaches of this deadly, life-threatening bullying.”

April 29, Tyler Tonna, a severely peanut-allergic first-grader at Parker Whitney Elementary was chased on the playground by a fellow student. He was holding peanut butter crackers (even though it is a ‘peanut-free’ class), chanting “Die Tyler.”

Earlier this year, a friend of Tonna’s wanted to wash her hands after eating peanut butter. Her first-grade teacher said no.

The regular harassment and endangerment of Rocklin students proves that even such a precious community is not exempt from the reaches of this deadly, life-threatening bullying.

Since that responsibility is often left to the allergic student himself, no matter the age, many young children are not safe in the classroom.”

As allergies and related bullying get more common, students need to be more aware of the dangers. The first step is implementing mandatory education for students and teachers about the dangers of allergies and how to prevent reactions and contamination. Schools and districts are not taking this action on their own; parents and students must hold authority figures to their responsibility. Write to the Rocklin Unified School District office about the importance of food allergy safety education. Sign a petition for stricter allergen labeling laws, mandatory allergy guidelines or more accessible epinephrine. Using the Food Allergy Research and Education website, become educated on keeping others safe and spread the word. Share any personal experiences with allergies. Donate to a research foundation like FARE. Watch a five-minute video on how to use an Epi-Pen. Attend FARE events, or the march in Downtown Sacramento. Support the Teal Pumpkin Project during Halloween. Ask before opening up a PB&J in front of new people and do not eat nuts in the classroom. Protection will be better when all are aware and taking action. Not understanding the severity of somebody else’s condition can end in fatal results.