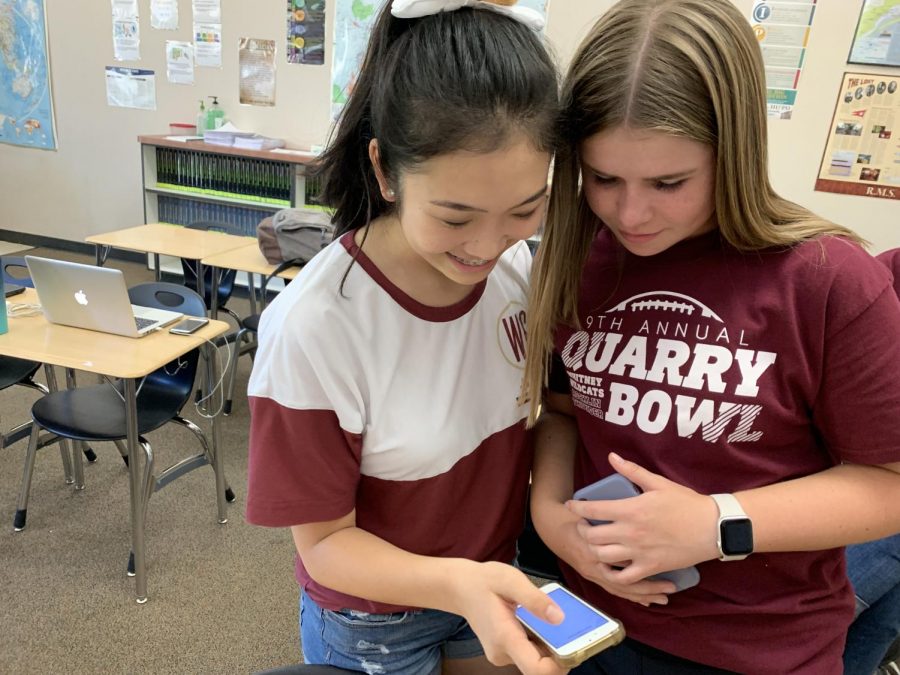 In Mrs. Seabrook’s room during lunch, Abigail Root and Allyson Ikeda use the 5-Star Student App to vote for Homecoming Royalty. Photo by Olivia de Lamadrid

From WOW week to a two hour long field day, the administration heavily encouraged all students and teachers to unite as “One Whitney.” However, these large event type ideas have been and will continue to be supplemented by smaller culture changes, such as the creation of a new 5 Star Students Whitney app.

For the past two years, administration and ASB has been working with students to try and encourage students to use the app. Their hope was if more students use the app, it would help to increase school spirit.

“Last year the app we tried using was Go Fan. It was a really good app, it was interactive, had our logo up there, but what we were finding was that a majority of the leadership kids were using it and nobody else. So, we brainstormed to figure out how we make kids use it, and get more involved. We need to bring it to them rather than just remind them,” Activities Director Mr. Jesse Armas said.

This year, the app is completely run by Mr. Armas and the X-Factor committee. They are responsible for posting events, setting up surveys and rewarding students for utilizing the app.

One of the many things the Go Fan app tried to do last year was to give students incentives for showing up to school events. Every time they checked into an event, they earned points. These points were redeemable for prizes at the student store, but ASB noticed that no one was coming in to claim their rewards.

“Rather than hold you accountable and expect you to come to the student store and redeem points, we just need to give them to you when you come to events. We had about eight to 10 people that redeemed all last year and we had a really cool prizes like X-Factor shirts, lanyards, pop-sockets … and nobody was doing it. We are trying to put rewards onto things so that students can see the value of doing things and being engaged within your campus,” Armas said.

According to the app, 293 students checked into the first football game of the year against Paraclete. This is a major increase in student interaction from previous years, when responses barely reached a hundred. Additionally, 424 students have submitted their votes for Homecoming royalty within the first week of the survey being open.

“If the kids say that the dance is no fun, why? Do we need more giveaways, was the DJ bad, should we work closer with the DJ to ensure up to date music is played? What do we need to do? We are trying to hear the voice of the school,” Armas said.

Students have found that the app makes interacting with ASB less complicated than in past years.

Others have noted technical difficulties with using the app. As with any new technology, users are bound to run into some problems while using the app, but this left some students with a negative opinion of 5-Star.

“I personally dislike the five star app because the sensors tend to get overused and they don’t work,” Graciella Morales said.

So far the 5-Star app has received mixed reactions from students. During WOW week, students listened to a presentation on the app during their social science class, and were given the opportunity to get their first “check-ins” by walking around to specific spots on campus, which allowed students to get familiar with the app for the first time.

“It wasn’t really useful to me, and I didn’t see the point of it. But I think this app would be really useful for freshmen or new students because it can help them get familiar with places around campus,” Aareen Kaler said.

As the year continues, ASB will see how effective the 5-Star app is, as students either use or ignore this new addition to Whitney High School culture.