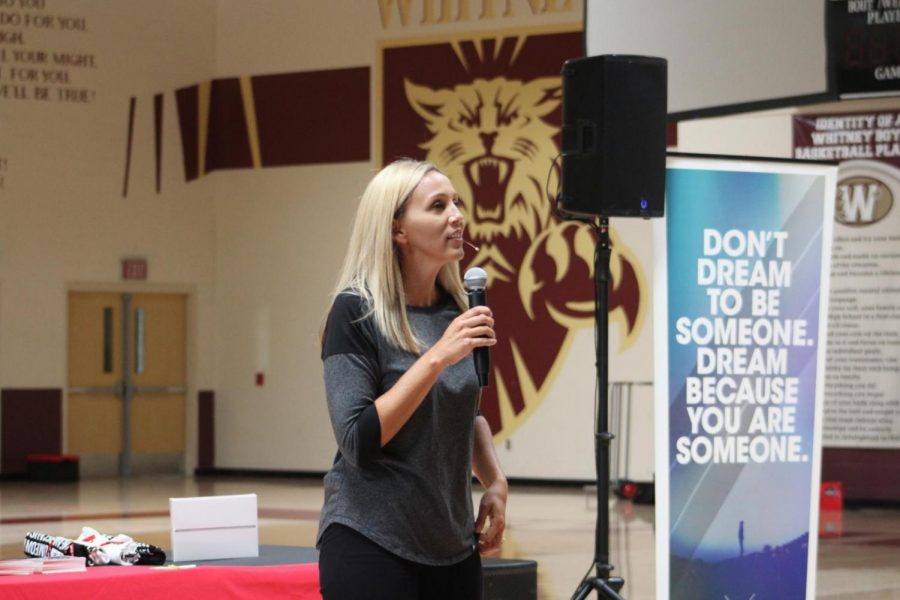 During the Air 1’s “Dare to Dream” assembly, Erin Weidemann talks to sophomores about the importance of chasing their dreams through her own experiences as a softball player and being a five-time cancer survivor. Photo by Sofia McMaster.

Creating an atmosphere of unity to help students thrive has been the focus for the past three weeks. The school-wide assembly Sept. 9 was no exception, where students learned the importance of dreams and their self worth.

During the assembly, Erin Weidemann talked about her experiences being a softball player in college and being a five-time cancer survivor and what she learned from those experiences. She also discussed how bullying and drug use obstruct people from reaching their goals.

Students entered for a chance to win an iPad by expressing what her speech meant to them and turning it in at the end of the rally. Each student left the rally with a wrist band and a “Dream Book,” where students could read and write about achieving their dreams.

Alaina Roberts expected a very different type of presentation about suicide. Instead of one that focused on dreams, she expected one that talked about the signs of suicide and how to talk about it with people.

“I was really surprised when it turned out to be more focused on self-worth and destructive behaviors rather than suicide specifically. Some of the videos and music were a little cheesy, but Erin’s story was so compelling. I thought she did a great job getting through to everybody and, from what I heard in my classes for the rest of the day, everybody liked it; even the cynical kids who usually wouldn’t pay attention to that sort of thing,” Roberts said.

Cade Krawiec also thought it was different from a normal type of rally, and found it informative.

“It was different from your typical assembly, as well as an eye-opening presentation. I thought the stories the speaker shared were really insightful and helped enhance her message,” Krawiec said.

ASB president Jack Grove said these types of activities have a definite effect on the student body, bringing change for the better.

“I have definitely observed a difference in how people treat each other around campus [after these types of rallies],” Grove said.

The ultimate goal of assemblies and rallies like these is to unite Whitney and create a more positive environment around campus.

“The goal is that if someone is hiding something and they don’t know how to express it, we really want them to be able to reach out and be comfortable around their peers and teachers, that’s why we want to create such a positive environment here at Whitney. We want people to be able to trust one another and feel like they can come to whoever they need to for help,” Maggie Brodie said.

Along with the assembly, the campus has been decorated with purple and blue ribbons, which are the colors of Suicide Prevention Week. Leadership plans to play music on Wednesday at the amphitheater during lunch to support suicide prevention and a walk for suicide prevention on Thursday morning at 7.