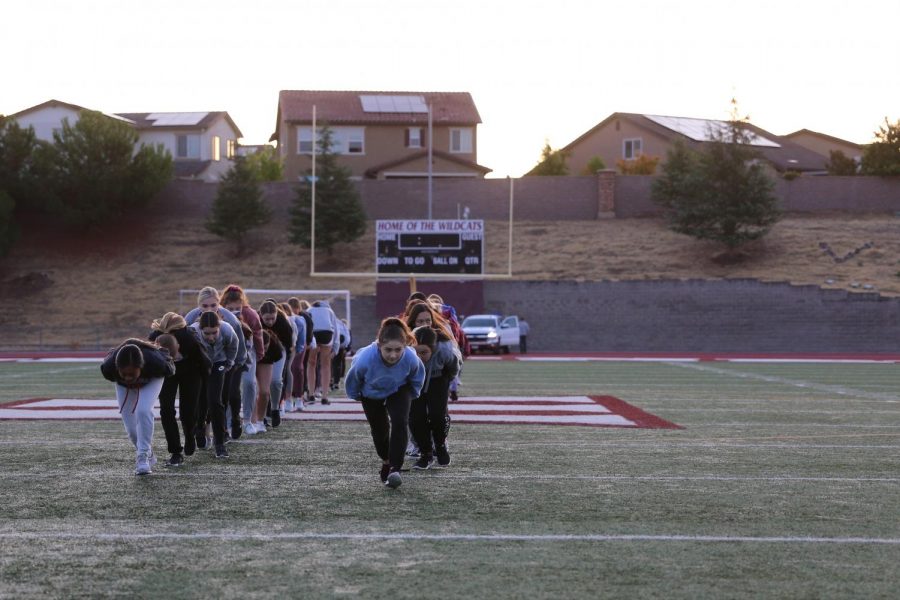 At the combined morning practice Sept. 19, the dance teams run off in two separate lines. Photo by Sofia McMaster

While everything is mainly geared towards the anticipated Quarry Bowl matchup, the dance teams have a different focus: sisterhood.

Performing together at halftime is a tradition for the Whitney and Rocklin dance teams. Coach Mrs. Mallory Ansley described what this showcase means to the dancers of the two teams.

“A lot of the [Whitney] dancers are friends with the [Rocklin] dancers and vise versa, so it’s fun for them to be able to work together on their shared passion of dancing. [Rocklin] is also our rival school, so there is some friendly competition, but they just ultimately inspire us to do our absolute best so that we can come together and deliver one epic combined halftime performance,” Ansley said.

Because of these prior friendships outside of school, some don’t even consider it a rivalry.

“A lot of us have danced together outside of school at studio so we don’t really have the same mentality of competition. The two teams put together makes each team push each other harder though, because we want to look good together, and we have high standards,” Abby Gardner said.

Others are able to create new bonds with girls on the other team through the collaboration.

“What I enjoy most is bonding with my team and getting to meet, befriend [and] interact with the Rocklin girls. We come together and will always support each other no matter what. I think it will be a lot of fun to perform with Rocklin, and I think the audience will enjoy it, too,” Allyson Ikeda said.

Similarly, the coaches of both teams reconnected through this event.

“One of my favorite parts about working with Rocklin is working with their new head coach, Coach Ellery Watkins. I first met her in 2015 when I was the long-term substitute for the Rocklin dance teacher, and she was a senior who was heavily involved in the dance program. It is really fun to work with her and collaborate as both fellow coaches and friends,” Ansley said.

However, this collaboration also required intensive preparation. Dancers Katie Scaglione and Maddie Loureiro had to choreograph the combined kickline and send it to Ansley weeks before the event. They even met with the Rocklin choreographers to teach the kickline.

“This season they’ve had a lot of choreography to memorize at once and in a short time frame, but the entire team has been doing an excellent job with that challenge. That has definitely been a highlight for me; seeing them rise to every occasion and always give 110%,” Ansley said.

Alongside Scaglione and Loureiro, Ansley also played a key role in organizing and coordinating the choreography.

“For the Quarry Bowl routine, I communicated with the [Rocklin] dance team coach regarding different aspects of the routine such as the genre of songs we were using for our individual team portions, the length of each of those portions, and general details about both the combined morning practice and team dinner,” Ansley said.

Making sure that the routine flowed smoothly became a major focus.

“The most difficult part of routine, especially [collaborating] with Rocklin, is figuring out spacing on the field and how we can seamlessly integrate ourselves into their choreo and then when they leave — smooth transitions,” Ikeda said.

After all, both teams are excited to showcase their weeks-long efforts at the Quarry Bowl halftime on Sept. 20 at the Wildcat Stadium.