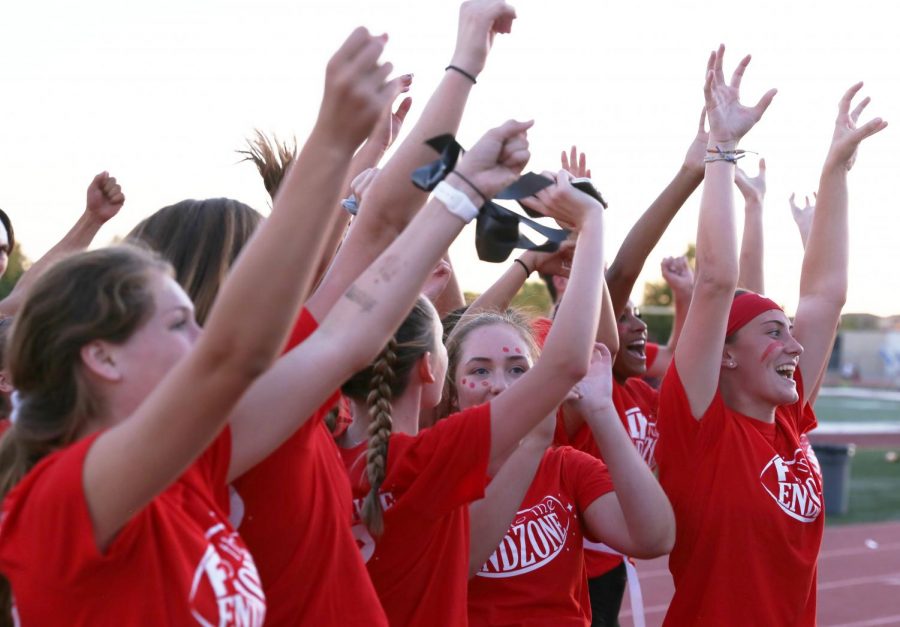 After an hour of playtime, the sophomores beat the freshmen 20-0 while seniors had a close call, but lost to the juniors 14-6. The annual powder puff games took place at the football field Sept. 23 to kick off the week of Homecoming events.

Moving up from being the youngest class on campus, powder puff player Maddie Dukes and the rest of sophomore team said they were surprised by their win.

“Since [sophomores] won last year as freshmen, it feels pretty good to win again. We thought we were going to be demolished by the freshmen with their high talk, but we memorized our plays, got ready to go and listened to one another to get our win and be so successful,” Dukes said.

Despite the loss against the Class of 2022, Brooklyn Farley experienced an exciting first game otherwise.

“Powder puff was a great experience. Although our class didn’t win, I will definitely remember our cheerleaders cheering us on and the game being full of spirit the whole time. With all this energy you get from just one hour of a football game, I will definitely be doing this again next year,” Farley said.

Grace McCollister was happy to be on a winning team again.

“I am really happy that we won against the seniors. Our team already had a really close bond, so it was really fun to be able to just cheer and work hard with one another, especially when Maddie Hamp made an interception,” McCollister said.

Even though the senior class came out with a loss, Nia Trinidad still had fun playing in her final powder puff game of high school.

“It’s amazing being able to actually play on that football [field] and not just watching from the side. Although we lost, it was fun just to play one last time with the girls I’ve played with for the past four years. Also, when the football players tried to give me plays to do, I actually knew what they are talking about, and that made the whole thing memorable,” Trinidad said.

The powder puff players were not the only ones in the game. Practicing for three lunches in the main gym from Sept. 17-19, the male cheerleaders learned a routine from both dance and cheer team members for the halftime show. However, Lucas Scalzo was the only senior cheerleader.

Scalzo said, “I thought it would be embarrassing and lame to be the only senior [cheerleader], but the juniors made me feel very welcomed. Because of them not pushing me out of their circle and letting me cheer with them was a moment I won’t forget this.”