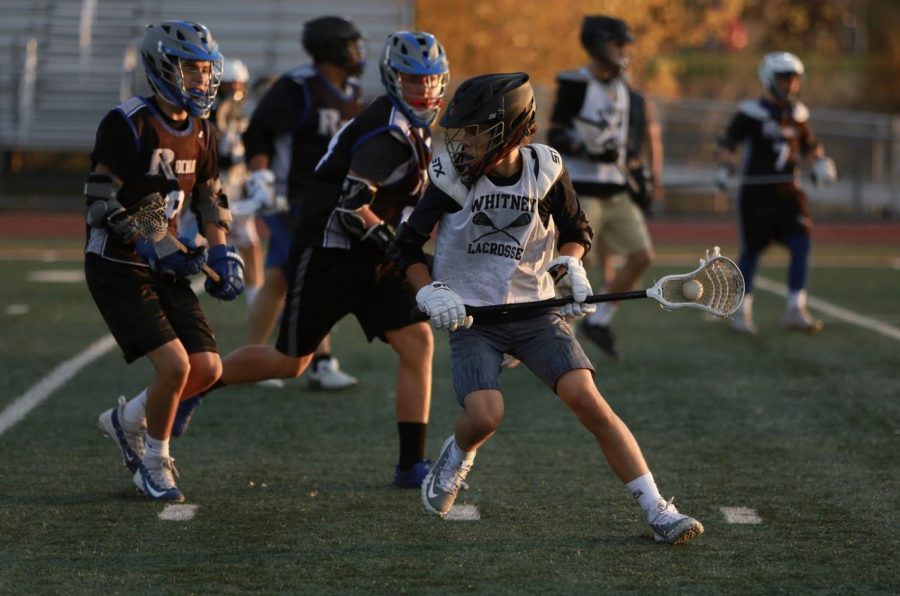 Caption: During the men's JV lacrosse scrimmage against Rocklin on Nov 15, Caden Smith catches the ball and prepares to pass to his teammates. Photo by: Paulina Solorazono

As JV player Nico Duffey steps out on the field for practice, he is ready to handle the challenges that come with playing a new sport. By taking this risk, Duffey joins the first group of athletes on campus to be part of the lacrosse program.

The first men’s and women’s lacrosse season begins this spring. Lacrosse is one of the fastest-growing sports in North America. According to Anthony Aveni, lacrosse originated from Native American tribes in the 1600’s. In modern times, the sport has slowly become more popular and is now able to be found on high school campuses around the United States.

“My family was really pushing to have lacrosse added at Whitney. After I started playing club, lacrosse became my favorite sport, and when I heard it was possible [to play] at school too, I really got excited,” Nico Duffey said.

The spring sports season is the first time lacrosse will be available to students on campus. Athletes of all levels of experience are testing their abilities on the field. To prepare, coaches Steve Cabral and Jeremy Veldstra have been training the team throughout the fall and winter.

“Since it’s preseason we are doing a lot of drills to build stamina and run a lot since lacrosse requires a lot of cardio and endurance. We have practiced getting the ground ball and learning how to aim,” Emma Dandeneau said.

Additionally, in recent years the growth in popularity has prompted local lacrosse teams to establish themselves, giving some students more experience in the sport.

“Growing up, I was a multisport athlete, and I played soccer, volleyball and golf, so lacrosse isn’t different to me. It’s essentially just like soccer with the aspect of running and training, using a stick is just like in golf but with a different technique, and volleyball’s speed and eye for the ball,” Selina Mitchell said.

The team has been training for the first game, where they will compete against Rocklin Feb 21.

“I started playing because my friend said he really wanted me to play, so I decided to give it a try and I really liked it. I used to play lacrosse at Woodcreek. Even though Woodcreek has a more developed team, I think with the upcoming years Whitney can really grow and become just as good as they are,” Charles Brewer said.