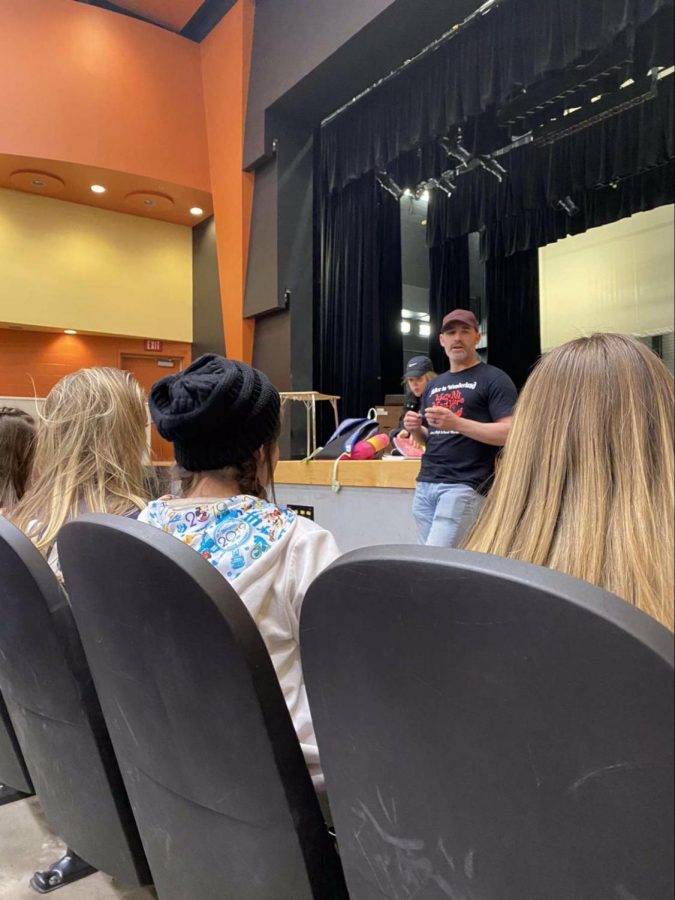 During rehearsal, theatre director Mr. Joshua Ansley gathers with cast members to discuss how the show is going and reminds them to make sure the crew is prepared for it by practicing every day. Opening night is March 5. Photo by Olivia Cull.

Released 14 years ago, “High School Musical” is still considered the most commercially successful Disney Channel Original Movie ever produced. According to Insider.com, during its premiere, the film generated over 7 million viewers and more than 225 million people have watched High School Musical since then.

Since it’s popular, the musical differs from the other shows that have been produced by the theater program. Not only is it a new type of production but it’s an opportunity for all cast members and backstage crew to gain a unique experience.

Cast member Zach Didier got the male lead in one of the two casts as his first show and role on stage ever, in the theater program.

“I play Troy Bolton [in the musical]. This is my first time being the lead in the show; it’s actually my first show ever, and I think it’s a great opportunity for me to see if I can do well in front of a large audience. I definitely enjoy acting in front of people,” Didier said.

In the same cast as Zach Didier, Michaela Leonor was cast as one of the female leads.

“I play Kelsey and she’s basically the play maker of the entire musical and the reason why Troy and Gabriela get closer together. I think she is a very important character. I was really happy when I got it,” Leonor said.

While cast members are in the later stage of rehearsals, their experience began in December with auditions.

“I did a lot of practicing in my living room for my mom. She was in theater for her whole high school experience, and when I found out it was ‘High School Musical’, I had to try out. My mom helped me prepare a lot: she would listen and politely critique me. I’ve never been in a musical before, so I was super excited when I got the role of Sharpay. I’m not really sure what to expect yet but so far so good,” senior Tabitha Bland said.

Rehearsals go differently for each actor and actress. There are three major things that the musical cast has to go through: singing, choreography and blocking. While practicing their vocals, actors usually go inside the choir room and have the vocal director, Landon Wheeler teach them the songs they have to learn. As a choreographer of the musical, the dance teacher Mrs. Mallory Ansley shows the dance routines that will be featured in the show. When it comes to blocking (staging of actors and working out the details of their moves), it’s the theater teacher Mr. Joshua Ansley giving the cast all necessary stage directions. The rehearsals go from 3-5 p.m., and all actors are called for different scenes during specific times.

Furthermore, along with all the choreography and blocking, there are also stage preparations to help the show come to life.

“The preparations are going great. As a stage manager, we haven’t been able to do much yet because tech week starts after the break, but my expectations are through the roof,” Kevin Chen said.

While attending rehearsals every day, students not only learn and develop their skills of oral communication and creative problem solving, but also the willingness to work cooperatively.

“Everything is going well, we still have a lot of work to put in, but I can really see the show coming together and us forming a community, making this one of the best shows Whitney’s ever put on,” Didier said.

However, every production has its temporary failures throughout the process.

“I think one of the major challenges is getting everybody there at the same time because everybody has a busy schedule and having rehearsal from 3 to 5 every single day after school is pretty stressful. For me, I’m a dance team captain and I’m also in broadcast, so I’m not always there, but somehow we always pull it off and it works,” Bland said.

Although the show has not started yet, such production has already made a huge impact, not only on the theatre program but the school itself, as a lot of teenagers grew up watching “High School Musical”. It was a major part of their childhood.

“I think it will get a lot of people into theater. It will expand the theater program, people will be interested in joining our program after watching the show,” Chen said.

For the cast members, it has become an important part of their lives as well.

“I get that the entire message of ‘High School Musical’ is just that you don’t have to stick to a specific thing. If you feel like you want to stick to something that is yours, you should go out and do whatever you want, and if you have a desire of trying something new, then just go for it,” Leonor said.