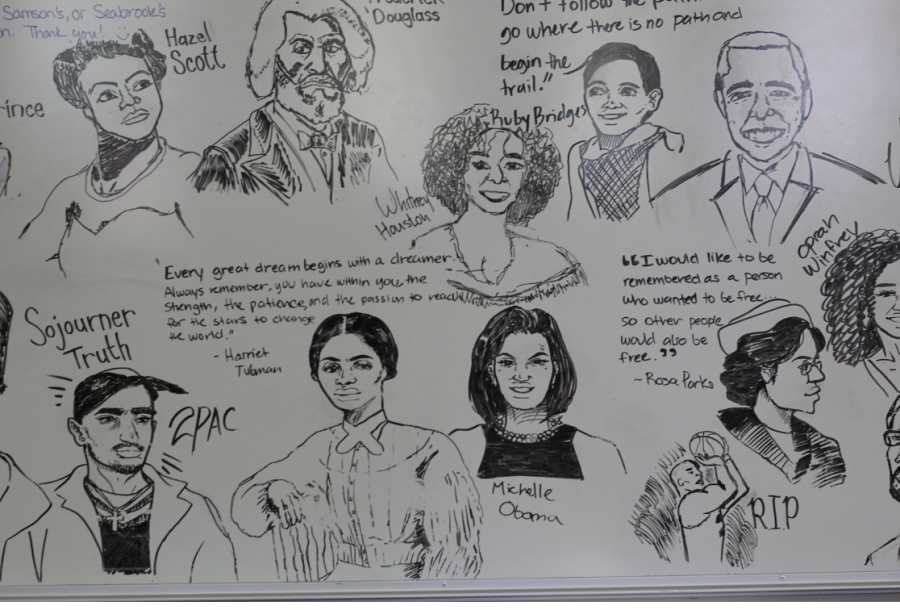 As Jacob Pearsall puts down his EXPO marker, he looks up to the whiteboard on D-2. Pearsall just finished drawing influential African American figures to help celebrate Black History Month as well as spread awareness for a new club on campus, the Black Student Union.

“Black Student Union is a club, just ‘Black Student Union’ is what you call it. It’s a gathering of students in an attempt to make our campus more aware of black culture and to support our black students on campus,” co-sponsor Leah Seabrook said.

While most clubs on campus are formed for friends to have fun at lunch or earn community service hours, the Black Student Union hopes to affect students across campus and provide information on issues minorities face.

“Part of the purpose is to help spread knowledge of black history and what it means to be black. I think a lot of kids growing up out here in Rocklin, including my own kids, are growing up in a great area. Whereas for me, I grew up, not totally impoverished, but in definitely a high needs area where there’s definitely a lot of things going on that black kids have to deal with in the inner city that you don’t necessarily have to face here in Rocklin. So it kind of gives kids an idea to understand what some kids are facing. [And for] people that are not black, it gives them an opportunity to learn more about black culture, which, in my opinion, can shorten the gap of misunderstanding between different races,” co-sponsor John Pichon said.

While the club is still in developmental stage, club advisors and students are trying to help coordinate events campus-wide.

“Since this is Whitney’s first year having the club and celebrating Black History Month, whatever we can do is great. We have things going on in the library, I’m personally trying to personally do social media posts and just talk to some of my students about it. I see a lot of teachers are taking part indoor decoration or whiteboard, and we’re going to do a WUM also this month, so right now we’re just really trying to get this thing moving so next year we can kind of make it boom a little bit more,” Pichon said.

In fact, members of the club are also trying to get involved in the community.

Despite only celebrating black culture, members of the club want other students of other races to attend club meetings and get involved in the union.

“Whitney High School’s Black Student Union is committed to spreading awareness about black culture and issues within the black community. BSU is not only great for students of color, but all students can benefit from the BSU,” club president Ravyn Davis said. “We strive to expose minority students to new opportunities and experiences. We hope to provide underrepresented groups with a safe place to talk about sensitive topics.”