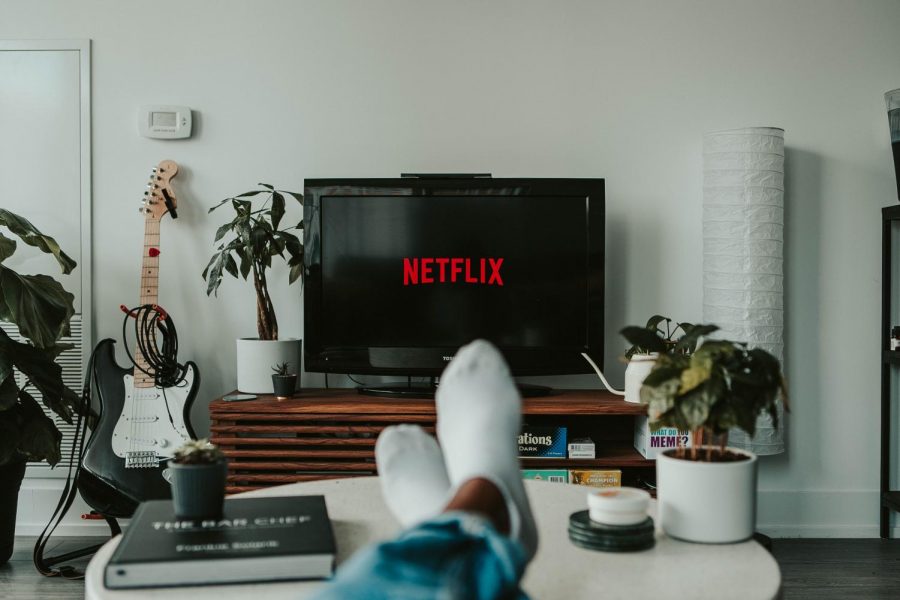 With extra time due to hybrid schedule and quarantine, Netflix can be used to procrastinate on the homework that should be done already. Photo by Mollie Sivaram from Unsplash.

I just finished season one of “New Girl”, and this show is extraordinary. The show follows the lives of Jess, who moves out of her boyfriend’s house after she had been cheated on, and her three new male roommates. A majority of the show focuses on the romantic relationships of the four characters in a light-hearted and fun way, covering things like true love, one night stands, moving on, and improving in a relationship. This is definitely an easy show to binge on, due to its amazing trait of keeping the series fresh. It is also light-hearted enough to forget about everything that is going on around us (for a little bit).

“Community” is a sitcom about seven very different people that form a study group at a less-than-ideal community college. The show is very self-aware and meta, making many jokes that poke fun at stereotypical TV and movie tropes, such as but also imitate it in some episodes. Throughout the series, the show does an excellent job of pushing you closer to all seven of these characters and builds connections and relationships between you and the characters. Not to mention the paintball episodes that make us wish we could have a massive, school-wide game of paintball on campus. If you already watch a lot of television (and love it), you will definitely get something out of this smart comedy.

The final season has been added to Netflix recently, so if you haven’t watched “The Good Place” yet, I would recommend it. The series begins with one of the main characters, Eleanor Shellstrop, in the “Good Place” or a version of heaven. However, Eleanor was less than the ideal person on earth, and thus feels that a mistake was made. After craziness ensues, she feels as if she must learn how to be a better person. The show deals with human morality and nature and questions whether humans can become better people. They do this while having some of the funniest moments and jokes on current television. After the first season, the show changes its entire plot to give a fresh new interest to the viewer.

On to the next series, we have “You,” a shocking thriller you won’t be able to take your eyes off of. The series focuses on a young bookstore manager named Joe Goldberg, and his life with the girl he “loves.” This, however, takes a deadly turn when it is revealed Joe is actually a stalker doing anything in his power to have his romantic interest fall in love with him. The series focuses on the ideas around human psychology, as well as a minor drive on the dangers of social media, the central tool Joe uses to his advantage. The show is perfect for when you’re looking for something suspenseful to watch. A third season will be coming mid-2021, just enough time to catch up to the series.

A six-season animated series, “BoJack Horseman” will go down as possibly one of the most remarkable series of all time. “BoJack Horseman” is a show that focuses on the fleeting stardom and pathetic life of ’90s sitcom star BoJack Horseman, an anthropomorphic horse. The show deals with his moral character and the relationships of the wacky, yet realistic characters that surround him. The show is praised for dealing with mental illness, human morality, psychology, and drug/alcohol abuse in one of the most realistic and daring portrayals in modern-day television. They can maintain their comedic tones, while not taking away from the core values and subjects taking place in the show. The show concluded its sixth and final season in January of 2020, which allows you to take all the time you need taking in the highs and lows of this series.

The Haunting Of Hill House

“The Haunting of Hill House,” simply known as just “Hill House,” is a horror/thriller series for Netflix. The series focuses on the lives, horrors, and relationships of the Crain family who became national celebrities for surviving the “most haunted house in America.” The central plot focuses on the family after tragedy strikes, bringing them together one more time to investigate the events surrounding it. Its main themes, being grief and the fear of losing those you love, fill the series from beginning to end. While not focused on sending a message, its main goal is to tell an engaging story, with plenty of twists, turns, and scares to make a brilliant TV show. The series is also getting an unrelated sequel,” The Haunting of Bry Manor.” The sequel will take an “American Horror Story” approach by including the same cast while telling a whole different story.