Ongoing conflict between Armenia and Azerbaijan sparks protests in Sacramento 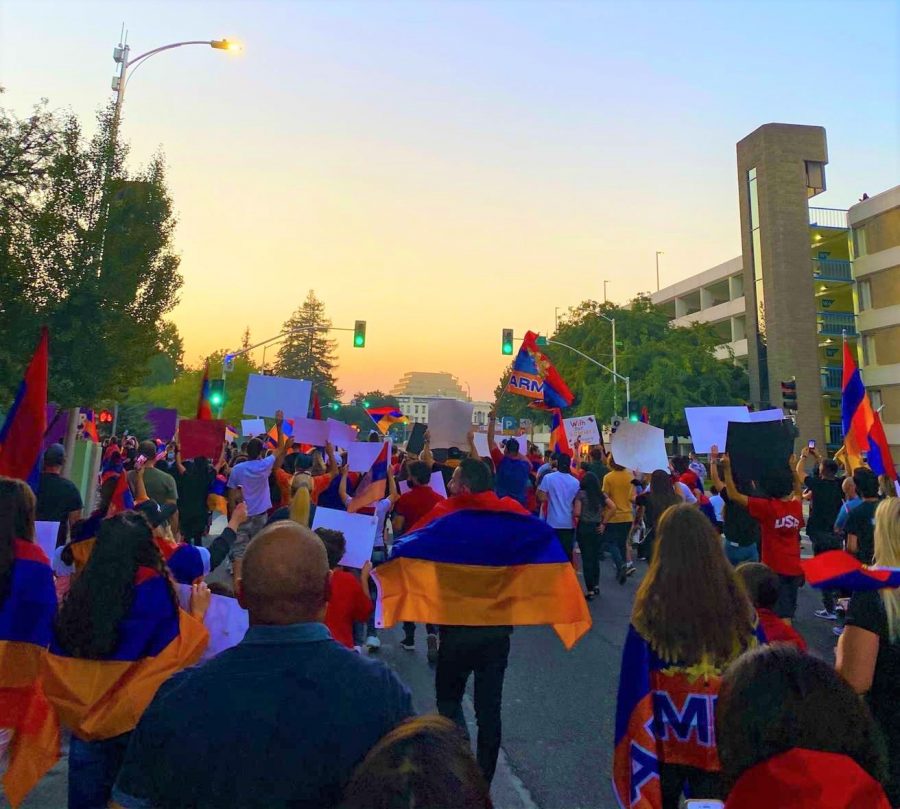 Local Armenian people gather in Sacramento on Oct. 5 to protest and spread awareness about the recent conflicts between Armenia and Azerbaijan. Photo by Diana Sahakyan

People gathered in Sacramento to protest and spread awareness of the ongoing conflict between Azerbaijan and Armenia on Oct. 5.

Armenia and Azerbaijan have long been in disputes over an area of land — Artsakh — that, for the past 3,000 years, has been Armenian governed and inhabited but technically crosses the Azerbaijan border, which has caused years of conflict. Throughout the late 1980s and early 1990s, wars frequently occurred, killing as much as 30,000 people from both sides. Due to the aggressive nature and mass amount of deaths, both Armenia and Azerbaijan formally agreed in 1994 on a ceasefire, a temporary stoppage of a war in which each side agrees with the other to suspend aggressive attacks, and the relative peace between both nations had been maintained until recently.

On Sept. 27, Azerbaijan decided to break the 26-year ceasefire and began launching aggressive attacks against Armenia. Although the reasoning behind the Azeri (Azerbaijan) uprising is not clearly known, Azerbaijan suspects that Armenia launched missiles that hit Ganja in Azerbaijan. What is known is that Armenia is on their defense, and they are really struggling.

Daniel Saakian is an Armenian student who has family in Armenia, and he has attended multiple protests.

“Azerbaijan broke the ceasefire, and they dropped missiles in Artsakh, which kind of started that war back up. But the problem with this is, they’re not really targeting the soldiers, rather, they’re destroying infrastructure in Armenia. So if you look up facts, [there are] about 30 casualties within Armenians, but around 2,700 places that have been destroyed in Artsakh – and those are innocent civilians. All men above the age of in Armenia have to go into the army, they’re automatically drafted,” Saakian said.

In response to this attack, citizens congregated in Sacramento and marched in protest. Among those who attended the protest was David Meltonyan, who is Armenian.

“These protests are happening so the Armenian people can receive justice and get their land back. The Armenians are protesting against the people of Azerbaijan and Turkey. While protesting, I felt powerful and influential, especially when people around the city are talking about it. Knowing that I’m making [a] change feels great,” Meltonyan said.

Not only are these protests going on to encourage the bringing of justice to the Armenian people, but even more so to spread awareness about the current situation in Armenia. Since many people here don’t have the power to help directly, the protests serve as a way to draw attention.

“People here, not in Armenia, can’t really do anything but donate and bring awareness to the situation because a lot of people don’t know about it or don’t understand what’s happening. With the protests, we’re just trying to encourage people to get educated and donate, so we can help out the people there because it’s a really small country, and there’s not a lot of military aid there. There’s just a lot happening in this tiny little country and the U.S is huge and a lot of people need to know about it because no one is doing anything. Mine and my cousin’s families are donating thousands of dollars to help Armenian soldiers get food and clothing, and help the kids there in the bomb shelters. So we’re just doing the protests to spread awareness and educate people on the situation, even if we can’t physically be there fighting for the people,” Diana Sahakyan, who is Armenian and also attended the protest, said.

This ongoing situation in Armenia has emphasized the importance of media coverage on multiple platforms across national borders. People are realizing that the media plays a large and impactful role in portraying current events.

“The protesting is more to spread awareness to other people, especially through social media. The reason that me and a bunch of other Armenians are protesting is because if we get a lot of people to post about it, then the media will eventually cover it, because since the media is not covering it, we assume that they’re taking the opposing, terrorizing side,” Saakian said.

Although this conflict is far away, many people here, and even in Rocklin are being affected. The nature of this conflict has the potential to be detrimental to families and friends across continents.

“One of my best friends is on the front lines and he is there fighting. I’m freaking out; I can’t sleep every day because I don’t know if he’s going to die or not, so that’s been really stressful for me. Also, my other friend who is there, she’s not on the front lines, but she’s still in that really horrible situation. [She] and her dad are in the war zones, helping out families, and they’re taking families of six, seven, eight people and helping them escape those war zones,” Sahakyan said.

These conflicts look like the beginnings of war between Armenia and Azerbaijan. Many Armenian citizens inside and outside of the country are starting to feel the effects and are trying to slow and prevent the spiraling of this engagement.

“I’m passionate about this because I am Armenian, and it’s like my whole heritage — everybody that I know in my family, and many of my friends, too. Armenian culture is a big part of me and a big part of my life, and the thing is that, without Artsakh, that culture would never be the same, to be honest. Not only will there be many casualties within my friends and family there, but also, it’s something that can be prevented with the spread of this information on mainstream media, and mainstream media isn’t covering it because of U.S relations with Azerbaijan or with Turkey,” Saakian said.

Reaching out and trying to educate people is one of the ways students are trying to assist with this cause.

Sahakyan said, “I hope people learn the severity of the situation and kind of understand why we’re protesting and why we’re doing what we’re doing. Obviously, if it doesn’t hit close to home for you, it’s not going to seem like a big deal, but we need people to understand the severity of the situation and understand how big of a deal this is. I hope that people learn the history of Turkey and of Azerbaijan and kind of try to understand why they’re doing this.”