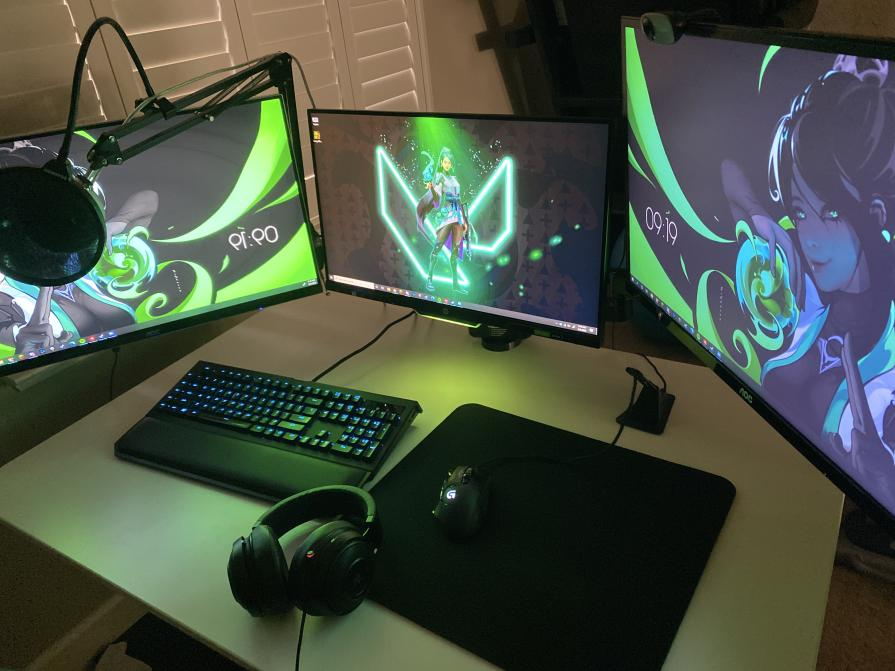 The lights are off, but Najeeb Khan’s gaming room is not dark. His three monitors cast a glow, illuminating the corners of his room as his Razer BlackWidow Chroma keyboard radiates rainbow. Khan grabs his black Logitech mouse, puts on his Razer Kraken headset, and logs onto Discord to prepare for practice with the Esports team.

“Esports is bringing gaming to a competitive level. Any way you think about a sports league, such as football or basketball, [is] the same thing with Esports. You’re taking any game and making [it] competitive, whether that be a league or a tournament. You create a team, fight other people competitively, [and] earn a ranking nationally,” Khan said.

The Esports team is new at school, having been created this year by Hamilton Park, Lorenzo Nakata and Khan, which already gained around 20 people on official teams.

“Myself, along with a lot of my friends, pretty much game all day. This is something that we find very interesting and a hobby of ours. We noticed that Rocklin [High School] had their own Esports team, so we decided to take their example and implement that [here],” Khan said.

After deciding to create the Esports team on Sept. 20, Khan, Park and Nakata discovered that they needed to sign up with the High School Esports League (HSEL) and submit forms to create the club and only had three days to do this in order to be included in Club Rush on Sept. 23. As a result, only two teams: Valorant and Rainbow Six Siege, were able to register to compete. However, the Valorant team has done exceedingly well so far, only losing two games out of the estimated 50 they have played and even recently coming in first at a tournament.

“My favorite part of being [on] the Esports team so far has been winning the tournament because I got to see our hard work pay off through the money reward and noticeable improvements in our playing,” Jin Lee said.

Lee is a member of the school’s Valorant team, which spent hours practicing to prepare for a tournament Oct. 25 set up by Carmel High School in New York, which schools across the country competed in. Ten teams battled it out all day through a bracket system in a grueling competition for a $100 prize pool with Lee’s team coming out on top and winning. During the tournament day, teams played a single round then took a 10-minute break before facing their next opponent.

The legitimacy of Esports is a common debate, but its members stand strong in their belief that it is a real sport. They communicate as a team to compete in leagues and practice for hours, striving to improve so that they may engage and rank in national competitions.

“Every day, we meet with random teams that are around the same skill level as us, play them, and see how we do. We watch back our games and make sure that we’re competing at the best we possibly can,” Khan said.

To the members, being a part of the Esports team has not only been a way to improve their gaming strategy, but also a way to form stronger bonds with their peers and build communication skills, like one would in a physical sport.

“It has been nice practicing every day to get better in a team setting and being on a team with players much better than me is helping me improve at a fast rate,” Park said.

To Nakata, Esports has been an outlet for him to practice his leadership and organizational abilities, as well as gain perspective on different players’ opinions and gameplay.

“As one of the presidents of the club, it has been cool seeing a bunch of like-minded people that enjoy playing video games just as much as me, gathered into one place. Now, I have a lot more appreciation for the people that organize not just clubs but events and other things as well,” Nakata said.

The Esports team not only offers a chance to practice and play videogames but also provides the opportunity to win awards and monetary prizes for your skills.

“There’s a lot of tournaments that give out peripherals like keyboards and mice. And that’s pretty much it, but there are also some random prizes along with the scholarships and the money,” Khan said.

The Esports team has had a positive impact on its members, such as Lee, and is welcoming towards anyone that wants to form a team and compete.

Lee said, “My experience with being a part of the Esports team has been filled with a lot of fun and happiness. I get to spend time developing more bonds with friends that I was already close with and it’s nice to see us grow closer and stronger in chemistry.”