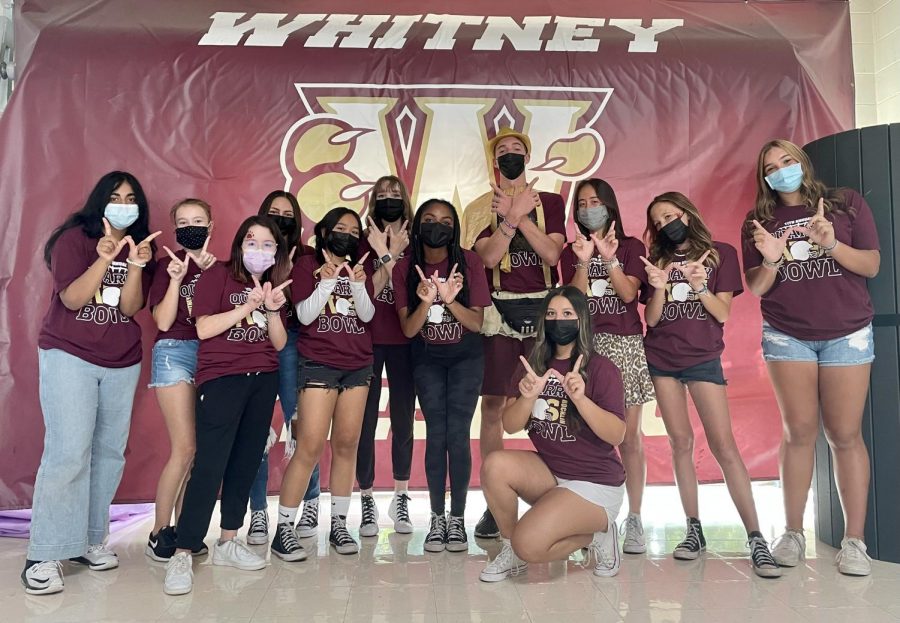 During the morning rally, students pose in their Quarry Bowl T-shirts designed by Mandi Pinkerton. Photo by Reese Moracco.

Working in eighth period graphics, designer Mandi Pinkerton wants to capture the thrill of winning at the end of an exciting game and execute it into a shirt.

“I was just doing my best to make a design I could be proud of,” Pinkerton said.

As she’s hard at work sketching, she pictures people wearing her designs on their shirts. After a long two years of not having the annual tradition of football games against Rocklin, Pinkerton, along with other graphic communications students in Ms. Whitney Lum’s advanced class, work to create a visually appealing design that would pique the interest of the students.

Pinkerton wanted to get everything just right for the design. The process was difficult at times with having to figure out specific details, but was rewarding at the end.

“It took me a while to get the shape of the helmet and the placement of the words to be the way I wanted them, but once I saw it on a shirt I couldn’t have been happier,” Pinkerton said.

She is always looking to challenge her skills, and her classmates have continued to help her and each other in the process. Pushing one another to work and think out of the box helped her with the final design. Not only Pinkerton’s classmates, but graphics teacher Ms. Lum has tested her abilities.

“Looking through the other submissions and some of the amazing designs that my classmates came up with, I was a little disappointed seeing all of the hard work that had been put into them not getting the recognition they deserved,” Pinkerton said.

However, she is grateful for her design being chosen, and hopes it evokes a feeling of pride.

“When people put on this shirt, I want them to be proud of our school. I want them to feel the excitement that comes with football games, and I hope my design can help make the Quarry Bowl one to remember!” Pinkerton said.