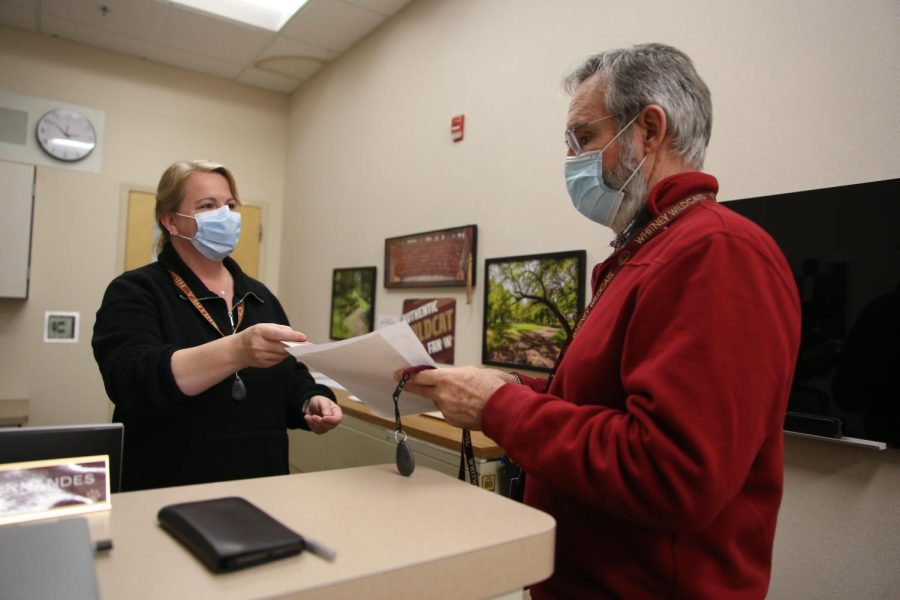 In the administration office, Mr. Tod Furtado receives an attendance sheet and fob from Mrs. Tamara Fernandes on Jan. 27. In the midst of a nationwide substitute shortage, Furtado is one of the teachers filling in during their prep period. Photo by Sofia McMaster.

World Languages Department teacher Mrs. Diana Troutfelt felt relieved when she received notice that she would be employed as a long-term substitute for Spanish. Previously, the class had been covered by a rotation of three different substitutes, an effect of the shortage caused by COVID-19.

“I think it’s important for teachers and students to get to know each other. With constantly having to change, we’re missing that piece,” Troutfelt said.

While her class was fortunate enough to receive a long-term sub who is confident in teaching the assigned subject, many classrooms were not as lucky.

In the midst of the COVID-19 outbreak, education has experienced drastic changes. The pandemic led to an increased number of teachers taking absence for health reasons; the fear of becoming ill, along with decreased pay, has simultaneously resulted in a decline of substitute candidates.

Principal secretary Mrs. Tamara Fernandes coordinates the daily substitute schedule. While the need for teachers is heightened, there simply isn’t a large enough applicant pool to fill the vacancies.

“[There has been] an increased number of staff who are out due to covid symptoms for themselves… their students, [or] their own children,” Fernandes said.

Fernandes remarked that while substitutes received a pay raise last year, the Rocklin Unified School District removed the pay increase for substitutes through the 2021-2022 school year, which may be another reason for the decrease in applicants.

“We’re not at the same level of pay as our neighboring districts, such as Western Placer, who pays a check at least $50 more a day,” Fernandes said.

RUSD is not the only district struggling to handle the issue. The substitute shortage is currently recognized as a nationwide challenge; while the schools were already dealing with a shortage, the pandemic has significantly escalated the problem. In 2020, many schools were forced to turn to a virtual or hybrid model. With most teachers working from home, the need for substitute teachers declined, causing many to leave the field altogether.

Other teachers retired from the profession because of personal risk factors. In an essay reflecting on the shortages, substitute teacher and university instructor Walt Stallings considers how age trends have contributed to the challenge.

“Substitute teaching has long been heralded as an ideal part-time position for retired teachers. Many of those ex-teachers are in an age range that puts them at higher risk for COVID infections and many may have decided that the prospect of getting sick is no longer worth it,” Stallings said.

Even for teachers who do not have apparent risk factors, the fear of contracting COVID-19 has also contributed to the shortage. With decreased substitute applicants, it has become increasingly common for permanent teachers and administrators to fill classroom vacancies.

Angela Shannon, like many students, has experienced the shortage first-hand.

Estimating that she has been taught by about seven different substitutes this year, Shannon said she has experienced frustration while struggling to learn a concept without the guidance of a teacher who is experienced in the subject matter.

“It’s hard to learn new stuff when there’s no teacher and/or when the sub does not know anything about the subject. It feels as if you are teaching yourself,” Shannon said.

Adding to her experience, Shannon reflected on a time this year when, in the absence of her general teacher, the internet went down.

Shannon said, “We could not get on a Zoom and all of our work was online so we literally sat there clueless and didn’t know what to do,” Shannon said. “The education when [you] have a sub is extremely limited [because] usually the sub doesn’t know the subject  . . . or hasn’t taken the subject in years. The subs try their best, but it’s not the same.”