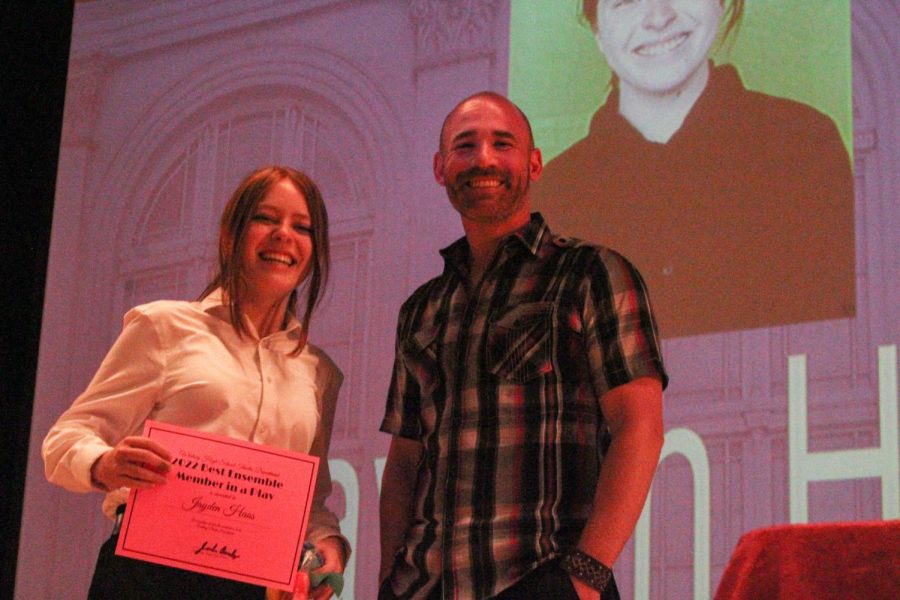 Mr. Joshua Ansley presents the award for “Best Ensemble Member in a Play” to Jayden Hass. Hass received the award for their involvement in Whitney’s fall production of William Shakespeare’s "Macbeth". Photo by Maya Gomez.

From 5-7 p.m., May 25, the theatre program hosted an end-of-year celebration in the theatre. Theatre Arts I-IV and Technical Theatre teacher and director Mr. Joshua Ansley provided cupcakes from Icing On the Cupcake. Ansley also compiled a 40-minute slideshow full of photos, videos and messages to help his actors reminisce on their growth during the past year. The event concluded with a 30-minute awards ceremony in which Ansley represented the program in distributing awards and small gifts to students who had shown extraordinary leadership, spirit, and talent throughout “Macbeth”, “The Sound of Music”, and various festivals and events. The honors were voted upon by other students within the program.

Theatre IV student and sixth-period peer teacher Melia Lambert won awards for her participation in the theatre program. She portrayed Lady Macbeth in “Macbeth” and The Baroness Elsa von Schraeder in “The Sound of Music”. To commemorate these roles, Lambert received the “Best Actor/Actress in a Play” award, as well as “Best Writer(s) for a Festival” and “Best Performer in a One Person Show” awards for her work at special events for the program.

“I am very passionate about acting, singing, and dancing and I am honored to be recognized for the work I put into the program to succeed,” Lambert said.

Lambert was celebrated by the program as a whole, but some students say they felt particularly proud to recognize their individual friends. Morgan Kazel is part of Theatre IV, and has been involved with Whitney Theatre since her freshman year. After her portrayal of Lady Macbeth in the fall play, along with her starring role as Maria in “The Sound of Music”, Kazel was honored with an “Outstanding Actor/Actress in a Musical” award, along with the “Best Writer(s) for a Festival” award with Lambert and a spirit award for her guidance and leadership. However, Kazel said that it was most inspiring to watch other students receive their awards, most notably Lambert, who is her close friend and castmate.

“Everyone works so hard all year, so it’s nice to have this awards show to reflect on it and celebrate with everyone. I love seeing my friends’ names called and everyone cheers so hard, and the people who get awards smile so much. It is all such a great ending for the year,” Kazel said.