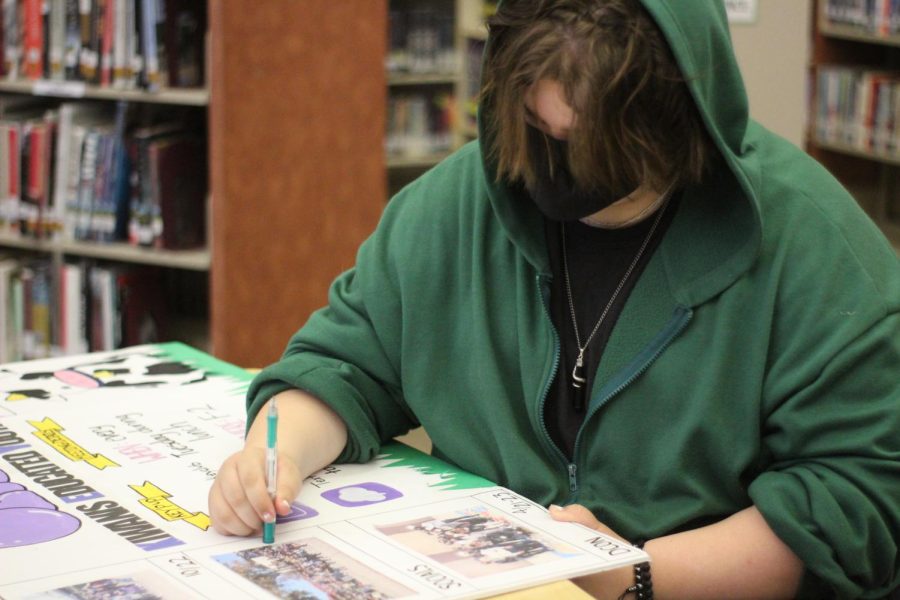 Preparing for Club Rush in the library Sept. 19, Cade George finalizes details on a tri-fold for the Key Club booth. Photo by Jezlyn Sotelo.

“It actually takes a lot [of] preparation. A lot of people think that you just roll out the layout but it takes from making and gathering applications to collecting them,” Armas said. “[Then we start] combing through them to make sure it is school-appropriate [and there] aren’t duplicates – [we] merge those to become one club.”

To ensure students’ differences are represented, it takes a lot of time and coordination to set up an event as big as Club Rush.

Armas said the process takes about a month, from applications opening Aug. 17 to the Sept. 20 event. The process includes club leaders talking to Armas and leadership students in case some are too similar and need to be consolidated.

As president of the Academic Decathlon Club, Akshaya Aalla considered the multiple elements needed to prepare for their booth at Club Rush.

“[Preparing] took me quite a while. I needed to create posters, flyers, Instagram graphics, plan how I would run my booth, and come up with giveaways,” Aalla said.

COVID-19’s impact on Club Rush created several obstacles for staff and students to overcome. “We definitely had some challenges because we were one hundred percentage digital and [used] Zoom for a while, and then we went to having two lunches. That was an issue within itself. You had to have two meetings because some [people] had first lunch and one president had one lunch while the vice president had the other lunch,” Armas said. “That was a huge struggle and we are happy that we now have one lunch back on campus so we can have one meeting and get back to some normal things.”

After observing how Club Rush went last year, Armas elaborates on how they’re improving it by putting signs on sticks that the club leaders can hold up to help with navigation during the event.

“Obviously there are things that are visual on campus like the rallies, the dances, the lunch time activities, and the student section. A lot of the work that clubs do is outside of Whitney High School, so clubs are an extremely important part of our campus culture and we value them tremendously,” Armas said.

Tang said, “Club Rush is so important because it not only allows the diverse groups at WHS to express themselves and share their passions, but gives those unsure of their interests or those looking to explore an opportunity to discover new things and join groups where they can meet new people and have new experiences.”