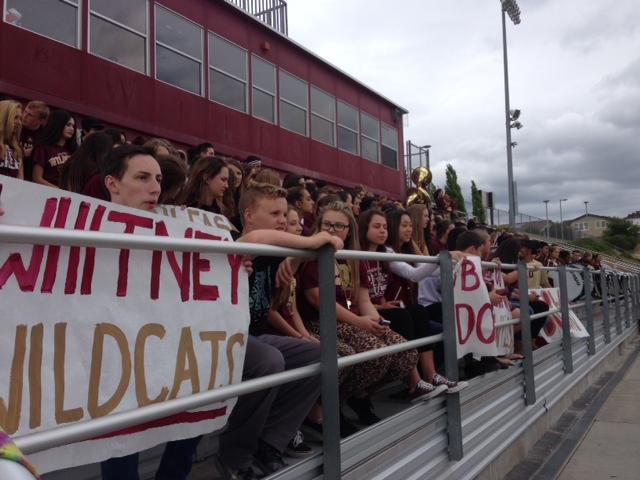 Students pose in the home stadium during the shooting. Photo by KAVLEEN SINGH

Clad in maroon and gold, students and their families gathered at Wildcat stadium May 8 to participate in an educational video by California Highway Patrol for their teen driving program, Start Smart.

“California Highway Patrol is revamping their Start Smart program and updating it with new curriculum and so this video is going to be a part of the PowerPoint presentations and the classroom presentations,” assistant principal Mrs. Jennifer Hanks said.

CHP is hoping to have the entire Start Smart program ready to roll out in the fall, and will be used statewide for several years for students and parents who participate in the program.

“Any opportunity for Whitney students to get involved in something original and unique and another thing that puts us on the map and makes us the best, that always excites me,” Hanks said.

Whitney was specifically chosen for the video when CHP officers who worked with the school for Every 15 Minutes recommended it to the other officers. The CHP is impressed with the program the school puts on every two years and reached out to Hanks for participation.

“I spoke to our admin team and jumped at the opportunity for our students to do something so incredibly awesome that can impact how students drive and save lives,” Hanks said.

Students were tightly packed in one section of the home side bleachers and were instructed to perform various actions while being filmed on camera, including screaming at the top of their lungs as Wildcats made a touchdown and acting disappointed like the opposing team scored.

“This event probably should have been promoted more, seeing that not a lot of students turned out, but the dance team and the cheer team are pumped and the people here are really spirited so I think the amount of energy here makes up for the lack of people,” Ryan Monahan said.

The football team was supposed to film a segment in the video but, due to not receiving clearance from the California Interscholastic Federation, was not able to do it. They have since been told they will have CIF approval for the end of the month, and will be featured in the video once that happens. The other groups proceeded as normal. A few X -Factor members also showed up to participate in the event.

Katrina Nham said, “I think it’s really cool that our school is getting this kind of recognition, to be recognized as one of the most dynamic and spirited schools in the state.”

by KALEEN SINGH AND KAVLEEN SINGH