Only one freshman on girls’ varsity tennis 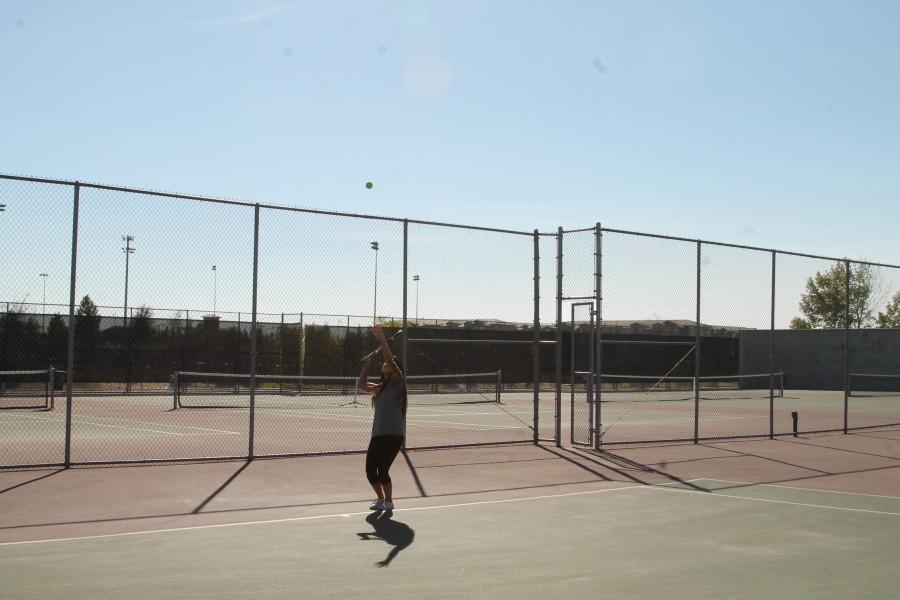 Freshman Keiko Watari throws the ball in the air ready to hit a slice serve. Photo by Missie Caracut

Stepping out on the court confident and determined, Keiko Watari takes on the new experience of playing the number two slot for doubles.

“I really enjoy playing [tennis], it’s something that I’ve been doing for a while [and] it’s also a way for me to meet new friends that share a similar interest [as] me,” Watari said.

Watari was confronted by Kate Greener who played on the JV team last year, asking if Watari wanted to play doubles with her this season. Together, Watari and Greener played through their 14 games with a 7-7 record.

“Keiko and Kate played extremely well together, because of their cohesiveness as friends off the court,that helped compliment each others strengths and weaknesses on the court,” head coach Cameron Archie said.

Watari is not a stranger to tennis; four years of practice gave her the confidence to try out for the team. The greatest obstacle she faced when she joined the team was trying to figure out how to get used to being on an actual team with many other girls unlike practicing with one or two other players; she also had to figure out how she would balance tennis and academics at the same time.

“[The team and I] introduced ourselves and made her feel comfortable by inviting her personally to all the team events and making sure she felt belonged,” Viyaleta Kachan said.

Wataris last match was a non-league match at Bella Vista on Oct. 30, where she lost to Antelope.

Captain Emily Nguyen said, “With more practice and experience, I definitely think she’ll make it up the ladder in no time. She has very powerful hits, good footwork, and lot of potential.”