Step aerobics steps back onto campus 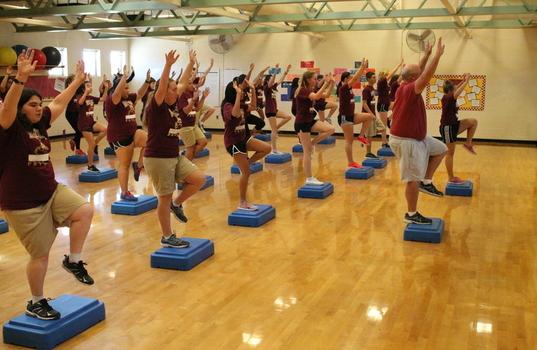 Every third block the dance room is packed. There’s feet stepping, music blasting and bodies sweating. However, dance is not in session. After a few years of being unavailable as a P.E. elective, step aerobics is back.

“I don’t think we’ve had it for three or four years; during that time we just tried some different things. This year we actually had enough girls that wanted to do it again so we decided to bring it back, and it’s been great so far,” step aerobics teacher Mr. John Bosco said.

Every class period consists of a 20-30 minute step routine and some form of cardio.

“I prepared [the routines] all summer. I learned that stuff all summer long and I learned a routine from a girl named Jenny Ford off of YouTube. She kind of helped me along. I ended up emailing her back and forth and we worked together on a few things, so it was fun,” Bosco said.

The step routines are set to today’s hit songs, like “Uptown Funk” by Bruno Mars and “Bad Blood” by Taylor Swift, but are sped up to match the beats of the routine.

Chandra George said, “I find it really cool how we relate our routines back to the beat of the music.”