Teachers clap and cheer after hearing a fellow educator share her story working for the district. Photo by Alaina Roberts.

Teachers clap and cheer after hearing a fellow educator share her story working for the district. Photo by Alaina Roberts. 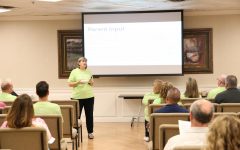 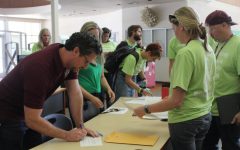 At the Oct. 3 meeting of the Rocklin Unified School District, conversation mostly revolved around teacher contract negotiations. Teachers shared opinions on the matter during the opening forum before the board shared.

“I would like to thank the district team and the RTPA bargaining team for work that was done collaboratively. It was the first time in a full negotiation setting in over seventeen months that we felt our concerns on safety were heard, it’s one of the most collaborative pieces we’ve ever done. I believe the language is best for students, it’s best for staff, and it’s best for RUSD,” school board clerk Susan Halldin said.

Even with the RTPA’s recent success of changing the contract safety language, negotiations are not over.

The next topic for negotiations has to do with special ed in the contract.

The next district meeting is Oct. 17, in the RUSD District Office board room on Sierra Meadows Drive at 6:30 p.m. Whitney High Student Media will continue to provide updates as negotiations continue.